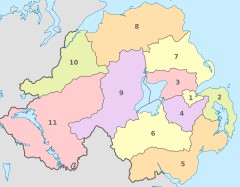 I come from a jig-saw family. If I know the location and shape of all 50 US States, it's partly because I re-re-re-assembled a [wooden] jig-saw puzzle map of that part of the World as a sub-teen. Ditto English counties; although that's less useful because the UK administrative boundaries have been serially re-re-drawn since 1965. Irish county lines are more stable . . . for the GAA. But 32 or even 26 counties is history. Lookit: the Six Counties of NI have since 2015 been rejigged as 11. You task is to match their names to the numbers on the map [R]: Antrim and Newtownabbey ; Ards and North Down ; Armagh City, Banbridge and Craigavon ; Belfast ; Causeway Coast and Glens ; Derry and Strabane ; Fermanagh and Omagh ; Mid and East Antrim ; Mid Ulster ; Newry, Mourne and Down. What crappy uninspiring names! You can't imagine shouting Up Armagh City, Banbridge and Craigavon at a soccer match; maybe they call themselves the ABCs, I would. And The Man quartered Co Dublin into The City, Fingal, DunLaoghaire-Rathdown, & South Dublin in 1994.

TGWIH of the generous hand was out shopping a while back and characteristically bought gifts for everyone while doing the messages. Dau.II was home and she'n'me were given The Irish Map - a 1000 piece jigsaw puzzle of an old style political map of the island or Ireland. We had a fight measured discussion about whether the picture was a genuine old out-of-copyright map lazily printed and processed by a company in China OR a modern map cleverly aged with the place-names artificially written in an olde scrypte. What do you think?: 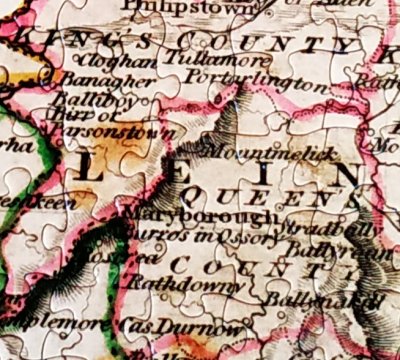 If it's a modern map artificially aged, then it's got to be at least 100 years old because Co.Offaly and Co.Laois are still sporting their plantation names.  There are several other interesting anachronisms: in the picture above, Birr is transitioning from Parsonstown; Maryborough hasn't yet become Port Laoise and Durrow is still Castle Durnow. Elsewhere the jig-map has Ballyborris for Borris, NewtownBarry for Bunclody, Newboro for Gorey, Macromp for Macroom, and Lough Deirgeart for Lough Derg. Too small back then [before the railways?] for Bagenalstown to merit an entry on this map, the village / townland was still Money Beg. There is significant push-back in the town today against adopting Muine Bheag as their toponym. The past tells us where we've come from. RTE on placenames.