Vlogging cartoonist General Knowledge [R] has a recent post asking What are the World's oldest borders? which is, as always visually appealing and also informative . . . if you like your info as soundbytes. I was cruisin' Borrowbox at the beginning of the month and thought I'd have a punt with The Edge of the Plain: how Borders Make and Break Our World 2022 written and read by James Crawford "acclaimed historian, publisher and broadcaster". Now that is a chunk of a book, coursing all over the world and time, focusing on borders between one polity and its neighbours.

The first chapter is about a Mesopotamian stele currently in the British Museum that was erected 45 centuries ago to delimit the boundary between Umma and Lagash over a disputed, agriculturally valuable, territory called Gu’edina aka The Edge of the Plain. The symbols were deciphered by Irvine "WedgeReader" Finkel [prev] and include the 1st use of the phrase No Man's Land as a buffer state between the warring polities. Much later Crawford investigates the virtual wall which attempts, rather successfully, to insulate the People's Republic of China from many destabilising aspects of Western economics and politics. It might give you pause to consider the grim norms of late stage capitalism, which form the invisible unconsidered background to our daily lives. Could someone protect me from that shite?

Two back-to-back chapters about modern border walls reflect on the desperate measures some governments will take to exclude The Other form their territories even if it means that fruit don't get picked, elders don't get cared and toilets don't get cleaned. One technique employed in Morocco is to gather hundreds of would-be residents of Europe to simultaneously assault the the razor-wire and concrete house-tall wall that surround the Spanish exclave of Melilla. It is like the assault on Badajoz [Ben Battle etc.] in the Peninsula War, banking that the border patrol doesn't have enough batons and hand-cuffs to secure all the immigrants. The scalers of the wall drop down on the Spanish side slippery with blood from the wire and many of them have healed scars from previous attempts. Unlike at Badajoz in 1812, the defenders don't use guns; the sanction is a duffing up and ejection through the gate back to Morocco at first light.

Bio-aside: [The strategy of prey to overwhelm predators by numbers is found widely in biology. Ecologists and evolutionists talk about r-selection vs K-selection. Humans are very much in the K-selection camp - we have one offspring at a time and invest our futures in that scion. Modern Western human youngsters are sucking at the parental teat well into their 20s. You have to go all Attenborough to find cases of r-selection: turtle-babies vs skua - periodical cicadas - Alaskan salmon]

In the Sonoran Desert, a super fragile ecosystem shared by Mexico and the USA, the human victims number in the hundreds. They have been forced to trek through a desert at night because the US border patrol acts performatively in El Paso to show that it will be impossible to cross the border there where you can almost spit across the Rio Grande. Walls across the desert and relentless roving Border Patrol ATVs, not to mention a USAF bombing range, have more or less driven the Sonora pronghorn antelope Antilocapra americana sonoriensis to extinction. And it's not just the glamorous large mammal that is affected by this illegal assault on a protected environment. 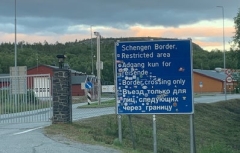 In Europe, there is a border between Norway and Russia [R, with added tourist stickers] far north of the Arctic circle where foot traffic is illegal but cyclists were, by Norwegian statute, allowed. There was a brisk trade in bicycles in Murmansk, which were then abandoned in Sør-Varange, NO where there is a heap of discarded bicycles. Many of them are children's bikes because they are cheaper even if unsuitably small. It is hard to shake the image of a Syrian dentist tottering across the border on trainer wheels. The heap matches a similar pile of discarded unsuitably small boats piled in a chain-fenced lot on Lampedusa, IT in the Mediterranean.

I could go on, but I'll leave that to you. It's great. I've returned the audiobook to Borrowbox and recommend that you snag it before any more people read the review in the Guardian.