Hare and the Young Dog 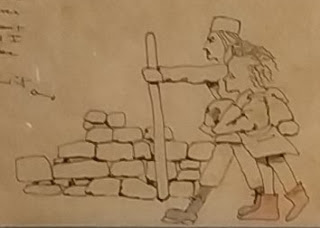 Talking to The Boy about a picture of his parents which sent me down the t'ilet rabbit 'ole of time . . .

In March 1975, we were having a coffee in a café in central Dublin and fell to talking with a USian back-packer who was sharing the long table. He

was a photo-journalist who'd been covering The Troubles in Belfast and Derry and was having a few days respite in The South. His bed-plans for that night were vague, as they were in those days, and we said he could have floor space in our bed-sit if everything else fell through. At 9.30 PM on that drizzly Friday night, the door-bell rang and there in the street-light was a draggled Mike looking for shelter. Over breakfast the next morning we hatched a plan to do the StPs weekend in Galway: because a) the craic would be mighty and b) The Beloved's bestie from school said we could borrow her gaff. 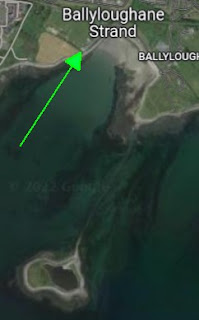 We agreed that we'd set off forthwith and separately hitch-hike to Galway marking the road way with tramp's signs in chalk [here are three sticks of chalk] at any intermediate stops. By the time I got to Kinnegad, I knew "ⓧ" that at least Mike was ahead of me. The Bestie's gaff turned out to be a tiny house = 2½ room fuel store / garage / shed ⤤ on the map [R] at the bottom of the landlord's garden on the far side of the railway tracks in Renmore. We finally all arrived [Bobby-no-pals coming in last] dropped our traps in the shed and headed into town across the railway bridge.

The craic was indeed mighty in town but, even though pints were 26p in "new money", there was only so much that poor students could take in. We bought some food and wandered back to the shed to make dinner. The lights on the water were glittery. It was all rather lovely in a hazy-mazy sort of way. We had to step off the tracks at one point on the journey as the Dublin train had right of way. Later we put pennies on the track, hoping to get a nice flat medal. But the first wheels bounced the coins into the cinders and we only found half of our experiment in the dark. 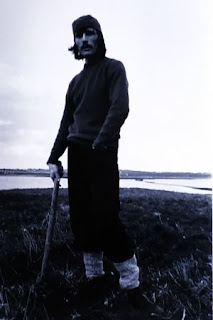 The next day, Sunday, we took the coal-shovel and a bit of plank and made sand-castles on the strand and at low tide walked out along the causeway to Hare Island [bottom left R]. The island has a sort of tidal gut, so at high water half of it is a lake. We were not so hung-over green that we got caught by the rising tide and forced to spend several hours waiting for the causeway to reappear. That's younger me [R with an old shovel handle and a hat madefrom the cuff of some jeans - Hare Is causeway in the background]. So that was Sunday. On Monday [Patrick's Day fell on the Monday that year]. we went into town again for the parade and afterwards hitched home to Dublin to be in time for class the following day.

All good fun . . . it later transpired that some members of our intrepid party had been having too much fun altogether because The Beloved fell pregnant, and [compares dates] that must have been started StPs weekend in Galway. We wrote a letter to Mike, long since returned to Washington DC, blaming him entirely for precipitating our change of status. He graciously wrote us a long illustrated letter about our adventures, and enclosed a couple of 8 x 10 glossy photographs, like in Alice's Restaurant. We framed the letter and it has followed us from kitchen to kitchen for the last 47 years. A few weeks later, a blue corduroy baby-carrier came in a parcel bearing A Lot of US stamps. Such kit was completely unknown in olde Ireland and we felt just the coolest kids on the block. Doubtless, normal folk looked at us pityingly as being unable to afford a pram. But in all our 38 years of child-rearing we never owned pram nor buggy nor stroller.