Knocking off the blocks 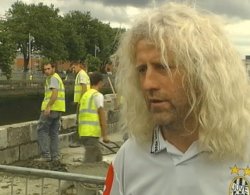 RTE tries to get more ad-clicks eyes on their site by trawling though the archives for quirky stories from long ago. In 2001, there was a road-traffic accident on the Dublin Quays and a section of the granite wall above the Liffey was damaged. The repairing contractor [Mick Wallace R] put up some fencing and brought all the damaged block out of the river and stored them on the side walk for reassembly. One night, some enterprising entrepreneurs came with lifting equipment and a truck and made off with 26 100kg dressed granite blocks. Luckily the Corpo had back-up from a matching section of the Liffey wall which had been removed for yet another bridge across the river. Yes, it's that Mick Wallace, the darlin' of radical Wexford, who was elected to the Dáil in 2011 despite everyone knowing that, as a building contractor, he'd accumulated a debt to The State of €2 million for failing to declare VAT on those contracts.

Of course, the Corpo could have commissioned some new dressed granite ashlars but that wasn't going to happen in these days when stone-masons work for €40/hr. Handiwork is expensive now that such skills are the domain of specialists.

My Son the Engineer has had a varied career in transport but his first job out of school was a FÁS community employment scheme to restore the parapet of a bridge over the River Tolka in Finglas. He rocked up to work in a high-viz jacket with a crew of disaffected youths under the supervision of two elderly stone masons who were teaching the lads a trade. The Boy learned standard work-practice 101: if it's raining, even a little, everyone piles into the tea-hut and plays cards.  The first task each morning was to scramble down the bank and fish out the stones they had laid on the bridge the previous day. The local unFÁS youths, far from appreciating the work to enhance the local environment, indulged in the simple pleasure of heaving big stones into the river from a great height . . . for the 💦splash💦, like.

It was both disheartening and futile work and after a few weeks, The Boy switched to work as a carer with the Centre for Independent Living. It was at least a decade, and 250,000 air-miles before he got back to Engineering.