Last time I rented a car, I had all sorts of trouble because I was a technorube: not knowing the difference between pressing a button and press&holding a button and unable to drive the central console on the dash-board. The thing is that modern cars keep upping the inventory of fitted-as-standard features. I don't think that, when the Ford marketing department meets with the engineering development, they think deeply about unintended consequences. How many old buffers are distracted by lights and beeps from the dashboard only to disappear off the road and through a hedge? I haven't done that yet, but I am bemused.

My Yaris is living its best life with someone else now, and our remaining car has been a lemon . . . coloured like a grape. It's most annoying feature was a dash-board light which alerted us to a spongy tire but didn't reset itself when all the tire were pumped full. So we ignored the flat tyre icon which rather defeats its intended purpose. But that car seems to spend more time at the Citroën dealer waiting for parts than actually on the road conveying people and sacks of sheep feed. Supply chain issues are a pain in the neck.

This time it's been three weeks since the clutch went futt and we had to get towed to Waterford. Luckily we have family nearby who can bail us out or at least provide a safe warm place to hang out for a day while the car is being serviced. . . but not for three weeks. The dealer offered us a courtesy car after a further week of delay and we've had a stealth grey Hyundai i30 for more than a week now. The Beloved was totes freaked because, she'd scarcely left the garage before a green light appeared on the dashboard couple with a little buzzy vibration. We assured her that as the light was green it couldn't be tooo bad; and in any case I was scheduled to driving the vehicle home. Well, it was quite aggravating until I'd worked out that this was a lane departure warning light functioning as designed. Which is mighty for motorways but less appropriate on country back-roads in Ireland. We worked out that the alert must work through some front-facing cameras and nifty software. It picks up both the median line and the dashed yellow lines which indicate the road-edge on minor roads in Ireland . . . and seems to be over-ridden if you indicate.

What the buzzy vibration is actually doing is forcing your hands to drive away from the transgressed road line. Because this movement is outside the driver's control it feels like the wheels have gotten caught in a rut or left the paved road or one of the tires is flat - sponge-bob, like.

Turns out that Hyundai have positively festooned the i30 with cameras because if you select reverse gear a post-card sized screen activates on the dashboard . . . to help you reverse. Because I haven't been successfully reversing cars and vans into constricted places for, like, 50 years. I took Dau.I to the railway station after a visit over last weekend. It had been raining stair-rods the night before, so when I reversed into a slot at the station, the console view was uselessly blurred with rural road muck. Find the camera challenge: 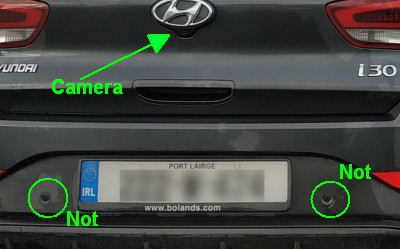 No probby, quoth I, I'll just go and clear the lens. Turned out there were two little black buttons on either side of the number plate. Ah ha, quoth I, the engineers have installed stereo distance sensing, very clever. But when I got back in the car the picture was still blurred. Dau.I, patiently [she's a librarian used to dealing daily with the tech-challenged] got out of the car and applied her thumb to a little button under the Hyundai company logo. Noisiv raelC! - instant gratification!  I've no idea what the licence plate bracket buttons so.