Apparently status normal for fisherfolk off the West coast of Ireland. That's according to Diarmaid Ferriter's On The Edge Ireland's off-shore islands: a modern history [2018] which I read through while sofa-bound in a cottage in Allihies, Beara, Cork for the long weekend of my birthday. 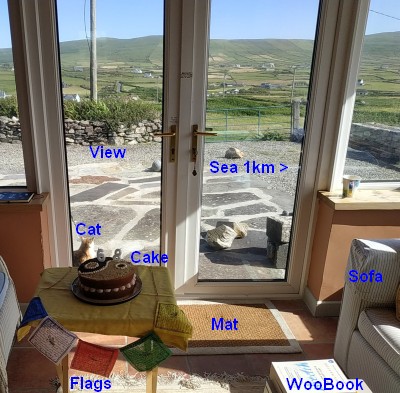 My twin sister has pals in England who gave her family rates on a well-equipped, dry, comfortable house looking out over a white-sand beach and towards end of the Beara peninsula at Garinish and Dursey. We have shared only a handful of bdays since we were kids. Dau.II was commissioned to make a half almond half chocolate ☯︎ cake with cherry meringue cream filling. Nothing better for thickening the arteries. I picked up the prayer-flags at the Dzogchen Beara café and Buddhist retreat which hangs out on a cliff facing Bantry Bay on the S side of the peninsula. That's defo worth a stop. Unfortunately the Dursey Island cable-car was closed for maintenance in March, so Tom and Izzy were almost the last folks to yomp to the end of the island this year.

Dursey features in Ferriter's book and the depopulation statistics are typical of the once densely populated off-shore communities of Ireland.

Coincidentally, while I was bucketing along the whale-road to Diarmaid Ferriter's islands, my audio book was Richard Nairn's [prev] Wild Shores: The Magic of Ireland’s Coastline. The conceit here is a complete circuit of Ireland - by yacht, ferry, car and foot - starting and finishing at the Antrim coast in a meta-reprise of Robert Lloyd Praeger's The Way That I Went. Walking in Praeger's footsteps is now a genre; what with By Cliff and Shore: walking the Waterford Coast by Michael Fewer [prev]. There is definite utility in going over the same ground after an interval of years - Praeger lived [1865 - 1953] in a world where corn-crakes Crex crex were abundant and molluscs and fish seemingly inexhaustible. Unpretty much anywhere on or off the coast, the view is despoiled, diminished and dusted with plastic crud. For a brief moment at the end of June 1922, I have been an expert on periphery of Ireland. But nobody invited me to a Coastwatch Ireland pub-quiz, so I was unable to monetize the knowledge before it all degraded and leaked out of my ears and onto the strand.

In 1841 there were at least 60 inhabited islands with a combined total of 34,000 people living out there making their own livelihoods and entertainment. Getting the cattle to market had a whole extra level of faff that mainlanders didn't experience. Many of these islands have been completely depopulated, some with government help like happened in St Kilda in 1930. The common story about island life is how hard it was: without running water, no flush toilet, a long way from a shop or a post-office. But in 1995 our home had no running water, was further from a bus-stop than many of the islands and it was either shit in a bucket or in the lee of a hedge. When our neighbour Mary White was canvassing to become a Green TD in 2007, she witnessed shockin' levels of deprivation behind the gaily white-washed facade of cottages in our CW-KK constituency. 100 km from the centre of Dublin, citizens and voters were simply abandoned to a squalid poverty because they had nobody to shout their corner. Islanders otoh were poster-children for De Valera's pantomime Ireland - speaking Irish, dancing at the cross-roads and wearing, like, Aran sweaters.

Posted by BobTheScientist at 06:34