Lewis through the Looking Glass 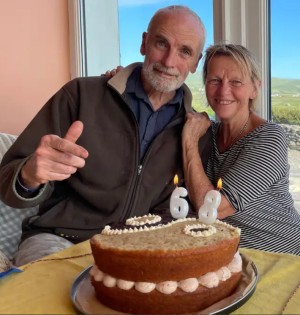 We shared a birthday in Allihies. There was cake [R]; it was a work of art; it was generously proportioned; the work of human hands. But it only took 3 days for four adults to consume the last crumb. And yes, my hand is indeed bigger than my sister's head

As An Old, I recognise that some things are slipping the cables of my memory. Like, in the rush to make a slab of flapjacks a few weeks ago, I forgot to add the sugar. The mix seemed a bit soupy, so I added oats until it was approximately the correct consistency. One of the issues with my recipe is that it includes 2 tbs of golden syrup - a quantity of some imprecision - being dependent on room temperature and the size of the tablespoon. I also had a figarey to add ginger as well as cinnamon. So those flapjacks were crumbly, hygroscopic with a bit of a gag after-taste.

When I returned home from Allihies and had started back to work around the farm - a never-ending task-list after all - I found myself drifting into the kitchen round about tea o'clock. I reckoned I deserved a wedge of fruitcake which Dau.II had made in the Spring with really cheap brandy-soaked Marks&Spencer vine-fruits. But it wasn't in the tin! I shrugged and supposed that I had done a Michael Rosen on myself and finished the cake in the middle of some night earlier in the month. Humans, and I daresay dogs and dolphins, are naturally predisposed to make sense of the world by telling ourselves a convincing story.

A couple days later, I mentioned the End of Fruitcake to Dau.II and she said that, of course, the tin had been required for transporting a certain birthday cake to Allihies and the fruit-cake had been transferred to this other cake-tin. That was a win! because I was now half a fruit-cake ahead of expectations; and this was like finding a €10 note on the street. I get such a rush from finding things (glasses, car-keys, a working pen, ) that it's almost worth losing them. Gawd, it must be easy to prank old folks. I'll take this as an opportunity to say that if we decluttered more then the essentials wouldn't find it so easy to hide in plain sight.

That Michael Rosen chocolate cake monologue was a much loved and  repeated part of the family repertoire when the girls were kids. But that was before I'd taught Human Physiology for 8 years on the trot. Through a HumPhys lens, I wondered if Rosen might have a case of Graves' Disease one of the symptoms of an over-active thyroid being buggy-out eyes like Marty Feldman. Indeed progressed Graves can require the insertion of a skin-graft gusset in the eye-lid so that the eyes can close properly to sleep. A little knowledge is a dangerous thing and I fully accept that my knowledge of Human Physiology is barely above pub-quiz level (catechism: there a 206 bones in the human body . . . maybe; sometimes; in most folk; depending on definition). It rather turns out that Rosen is a poster-boy for Hypothyroidosis   - picture - and has for a long time been on artificial thyroxine to keep his metabolism ticking over at something approaching normal.