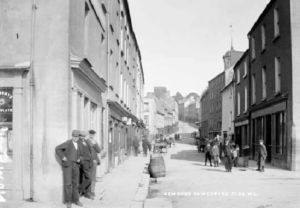 We shuttle between our mountain home and the Costa na Déise a lot and the journey is almost always via New Ross [R] - arguably the most depressing town in Ireland. All through the 20thC, small town Ireland was, it seems, too poor to afford house-paint. But the grim grey grey facade of cement-rendered public buildings (often convents and banks) was most obvious when you could see the whole panorama from the other side of a river. Ross has a chance now that the Rose FitzKennedy bridge has started diverting belching Rosslare-bound HGV traffic from the quayside. In 2010, for example, the Royal Hotel went up in smoke just after plans were announced to re-furbish it. For more than a decade the steep awkward town-centre site was vacant except for a set of weeping steps running beside the weed-abundant lot. Just this year, however, the former hotel site has been re-purposed as a steep awkward public park - absolutely not wheel-chair accessible; but for the moment full of promise.

At the Northern extremity of town, where the ring-road meets the road to Enniscorthy and Dublin, Mannion's farm-shop and garden centre has opened right opposite Mannion's Bar (food and drink). For us, this emporium was both too close and too far from home, and we were always destination-bound, so we never stopped to buy honey, strawberries or carrots . . . until Saturday 25th June. For a couple weeks, I'd noticed a discrete ad for Scúp ice-cream on the fence but that Saturday arvo, having Dau.II in the car, I swung into the car-park to chekkitout.

Mannion's stock a variety of exotic food-stuffs that you'd never find in a regular Irish grocery: noodles, tamari, Italian petit-fours and, of course, a Baskin-Robbins-like bank of scúpable ice-cream from . . . Scúp which creates Luxurious Gelato in an industrial shed on the edge of Wexford town. Like Sustainable Sausage, so long as the product is edible, you can generate more sales with a professional website than by making something distinctively different/interesting in a blind taste-off. They paid for 1 minute of  marketing video too.You can get a taste of Scúp's aspirations by knowing about their Individual Masterclass €1,950. You can expect Scúp, fadas and all, to follow Nobó [prev] into the international market. After some dithering, I plonked €3 down for one scúp of mango-and-passionfruit in an edible cone - so I didn't have it in a single use waxed paper tub. Dau.II was off her feed after a curry binge the previous night, so sensibly refused to join me.

I was disappointed at myself, the scúp-technician and the structural integrity of the product when about 40c-worth of my scúp detached itself from the cone and went splút on my shoe as soon as I stepped out into the dusty car-park

Mannion's don't have all their eggs in one basket. They have just started selling "Handcrafted Gourmet" Popsicles - the arty exotic line of colourful sorbets on a stick which was launched in Cork in the middle of the pandemic winter. I knew all the principals in Popsicle before they were famous and have given them a puff before. I'm delighted that their reach has penetrated 150km along the N25 towards Rosslare and the big international mondo di gelato