In the 00s, I spent a lot of time poring over the the text of Bunreacht na hÉireann / The Irish Constitution; especially Article 40 - Personal rights; Article 41 - The family; Article 42 - Education and children. My interest was pushed by our desire to educate our children at home a right which is, for complex 1930s Realpolitik reasons to do with the protestant middle class, specifically allowed by Article 42.

In my head, at such times, is the aspirational phrase  "cherish all the children of the nation equally" even those who are, in the widest sense of the word, different. The Blob has been hot-and-bothered about unequal treatment in cases of medical misadventure; the vulnerable; orphan drugs for rare diseases; the imprisoned. I'm not the only one who recognises the power of this ideal. Cherish was founded in 1972 to advocate for lone parents and their, then "illegitimate", children.

In a recent episode of hot-and-bothered, I searched the constitution for cherish and came up almost empty. Only mention is Article 2 "Furthermore, the Irish nation cherishes its special affinity with people of Irish ancestry living abroad who share its cultural identity and heritage" which is about Chicago policemen and the diaspora rather than small citizens in diapers.

Turns out the cherish phrase is from a much shorter, more shouty, earlier document The 1916 Proclamation:

The Republic guarantees religious and civil liberty, equal rights and equal opportunities to all its citizens, and declares its resolve to pursue the happiness and prosperity of the whole nation and of all its parts, cherishing all the children of the nation equally . . . 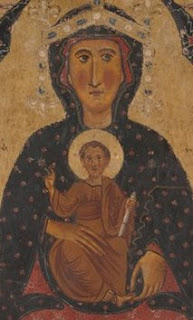 These children, no more than De Valera's Article 2 children, are not small humans below the voting age; they are rather mythic children which have sprung from the loins of Cathleen ni Houlihan or even Caitlín Ní Uallacháin the personification of Ireland. A bit like Athena being abstracted, fully formed and in armour for the fray, from the head of Zeus. The Proclamation Children are grown-arsed adults being required to wave the flag and ready to die on the barricades. Ireland, through us, summons her children to her flag and strikes for her freedom . . . supported by her exiled children in America and by gallant allies in Europe . . . and by the readiness of its children to sacrifice themselves for the common good.

Full disclosure: the picture [L] is not Caitlín but rather the Madonna by Margarito d'Arrezzo; the oldest painting in the care of the National Gallery in London and recently restored to something nearer the artist's original intention.

My point is that for human rights, it's a cop out to refer to precedent or defer to authority. We have to fight for these rights for ourselves against a penny-pinching and complacent bureaucracy. But more important we have to fight for the rights of the dispossessed because, by definition, the ability to advocate for themselves in curtailed. To the barricades! To the picket lines!