At heart we are stick-shaking primitives under a veneer of rational thought. Thousands turned out for the relics of Saint Thérèse of Lisieux when they arrived here on tour in 2001. Is a book which was owned by {insert big cheese here} or signed by the author really more interesting / valuable than an almost identical book without these inside-cover scribblings?

I've mentioned before that I've been following Leo "Shipwright" Goolden's quixotic quest to rebuild an Edwardian sailing yacht called Tally Ho. Quixotic because everyone agrees that it would be cheaper and simpler and much quicker to build a new yacht than to try to replace pretty much every artifact which makes up the boat and/or try to salvage more than the anchor from the original build. All this is going down in Port Townsend, Washington - just across Puget Sound from Seattle. And the reason for that is because Port T. has one of the highest concentrations of grizzled and experienced shipwrights in the USA, maybe the World. Every couple of weeks Leo pushes out a ~30m video about the project and about the Effectives in his team. The first vid for July made no mention of Tally Ho. It was rather to celebrate the launch of another quixotic Port Townsend project: to rebuild a purse seiner called Western Flyer - this: 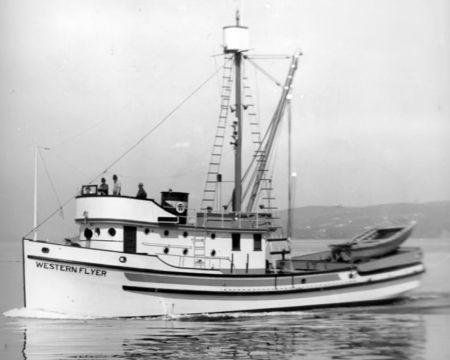 It's not [even?] a sailing boat! And it was launched only 85 years ago. And it's been sunk three times. It is not obvious why, in 2015, the wreck of the Western Flyer should have been worth $1,000,000 dollars to a marine engineer and entrepreneur called John Gregg. That's just the hulk, a king's ransom has also been splashed on the material and highly skilled labour for the rebuild. Part of skill is appreciating where your work fits into the greater project and making life easier, and more efficient, for those who come after you in the process. It is autonomy with interaction: boat-building, the the best science, isn't boss driven it is internal-standards and deep knowledge driven.

The answer to the million dollar riddle is that the Western Flyer was chartered by John Steinbeck in March 1940 for a collecting trip in the Gulf of California with his pal, marine biologist and fount of compassion, Ed Ricketts [whom prev]. 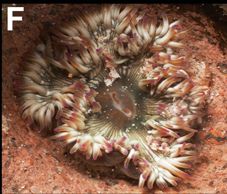 That six week trip was written up as The Log from the Sea of Cortez [1951] a rollicking, inspiring tale of salt, fish, invertebrates and drink. Nobody died, anyway. The same cannot be said for the inter-tidal invertebrates, however, 500 different species, 50 of them new to science, of which were collected and bottled and brought back to Monterey for scrutiny and analysis. An international expert of Phylum Cnidaria, Oskar Carlgren, named three of the novel species of anemone Palythoa rickettsii, Isometridium rickettsi, and Phialoba steinbecki [L], after the principal investigators.  Too bad that current taxonomy reckons that Isometridium rickettsi is a synonym for Metridium farcimen which was described more than 100 years before the crew of the Western Flyer lifted their specimen from the fore-shore.

Nicely, neatly, John Gregg's plan for the Flyer is to abstract her six-weeks' experience as a marine biology station in 1940 and make that her 100% future. Being small and nimble, the hope is that the Flyer will go where larger government- and foundation-funded fear to tread: inshore and round the coast to document the status of this crucial ecosystem. Crucial because the shore is the interface between humans and the ocean so its health has a disproportionate impact on ordinary people - wild-swimmers; beach-combers; kids with shrimp nets; poets; surf fishers. But also because edges are always more diverse and interesting.