Guardian reports that James "Gaia" Lovelock finally pegged out 2 days ago at the age of 103 . . . exactly. He was born on 26th July 1919. He made a modest fortune early on by inventing devices to measure minute quantities of specific chemicals in the atmosphere. With the money set himself up as an independent scientist and researcher (and prolific author) with his own lab on his own farmlet in the English West Country. Because you could, in those days, before the possession of property was polarized so fiercely between haves and have-nots. We made that cut also by purchasing, at public auction, a ruined farmstead and 7 hectares in 1996. Because Lovelock was a bigger person than I will ever be, he planted 10 hectares of his gaff with native English trees. We have contributed the twentieth part of that as our own arboreal carbon sink. He beat himself up about doing his planting wrong. But we should forgive the error as the logical nicety of a passionate but critical-thinking advocate.

I met him twice, for a fleeting minute or two each time. Both times Lynn Margulis was in the room, actually or metaphorically, and it is appropriate to show these two maverick iconoclasts in the same frame: 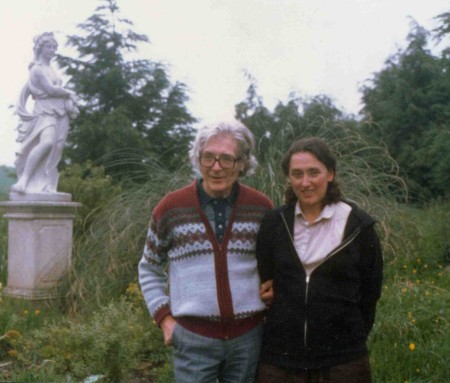 There will be obits all over the place because, although regular scientists scoffed at the idea that our blue dot planet was a coherent homeostatic super-organism, nobody hated on him for questioning the status quo. I don't think he will have gotten any pleasure from dipping out before the most frighty of his predictions [agricultural failure and mass migration]came true. Although, at that talk I attended, he did implicitly compliment us for living in a place [Ireland is an island surrounded by water] that was likely to become an Ark for The Saved against the coming armageddon.