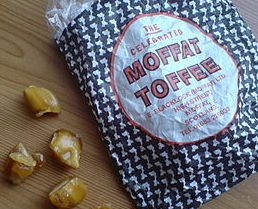 Another Moffat heard from! We left Gwen Moffat swinging is space from an uncertain belay. I've spent the last couple of weeks coursing through The Secret History of Here, a year in the life of Alistair Moffat, arts impressario [Edinburgh Festival Fringe], journalist and author. About 30 years ago, Moffat left the buzz of Edinburgh and bought a ruined steading and 80 acres just south of Selkirk in the Scottish Borrrder country. As a writer, working from home was normal before it became trendy covid-imposed and his wife Lindsay had an interest in horses, so buying a piece of semi-self-sufficient security as a finishing school for his three townie children seemed like a good idea.

Hmmm sounds a lot like us. Moffat was larricking across a hillside some years ago when he noticed that a roughly shaped boulder had ᚐ ᚆ incised along one edge. That's really not a lot of signal to realise that he had the tail-end -HA of an ogham inscription. No amount of searching in the locality has been able to turn up the rest of the words. This is, apparently the most easterly example of ogham script ever found. It's the kind of discovery that changes a chap's life to one a little more observant, a little more obsessive; like our Ringstone has put a big dunt in my own driftiness about the landscape. Here's The Henhouse in the midst of its patrimony: 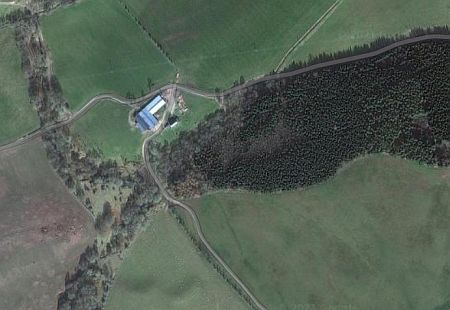 Did someone mention maps? A bit more than myself, Moffat has been poring over ancient mappes, rent-rolls and census returns to conjure up a deep history of the random tract of fields, tracks and copses that he acquired. It's like Prairyerth, William Least Heat Moon's rabbit hole of details about a single county of Kansas "Be careful going in search of adventure - it's ridiculously easy to find." You can do the paperwork at your desk: cosy enough having stoked up the wood-burning stove. But to really discover the landscape you have to be up and doing outside. Moffat was greatly assisted in this element of his research when the family acquired a rather disagreeable Westie Terrier called Maidie who didn't like puddles, long grass, nettles, streams, strange dogs, cats or cats-and-dogs rain. Walking off some of this prima donna's yappy energy required long treks before breakfast pretty much every day. But it gave them both an all year all weather view of the place.

The small steading is bisected by an ancient trackway which served as a thoroughfare long before the Romans pushed north of The White Wall to subdue the wild folks of North Britain. Conveniently the local laird officiously shifted the right-of-way in the 19thC which allowed the Long Track to sink back into undisturbed obscurity. With the help of his pals Rory Low, the detectorist, and Walter Elliot, poet, writer and archivist, Moffat has turned up a trove of treasures from neolithic arrowheads to silver pennies to a pair of WWII love-tokens.

Another thread holding the book together is the walking-in-wonder relationship between nearly 70-something Moffat and his 3 y.o. gdau Grace. Moffat's own father died at 70 and he has a curmudgeonly streak of reflecting on the end of days - both his own and the planet's. He also has a tendency to get weepie over the might-have-been which blight all of our lives. Grace otoh is full of curiosity and the joys of Spring all year round.

The thing about later books by established authors is that their publishers are [too] indulgent about copy-editting. A book is not the same a blog. The Blob is now 2 million words of stream of consciousness: nobody is ever going to read that through at a sitting. The life-in-a-year format inevitably includes stuff for thin months which a ruthless good copy-editor would have left on the cutting-room floor. The Secret History of Here errs towards scattergun middle-way of The Blob and away from both The Haiku & from the coherent longform narrative you find in a real book. Maybe it's better as a talking book than the e-book I had through Borrowbox?