At 08.20 hrs on the morning of 8th October 1952 in lifting fog the Night Sleeper bound for Euston from Perth thundered past three adverse signals and ploughed into the end of a local train stopped at the Up Express platform in Harrow and Wealdstone station. Minutes later a Northbound express struck the pile of debris, mounted the platform and took out the station foot-bridge. It was a mess:

Railway carriages were / are built to keep the rain out not trains and there is a hella stack of inertia in 700 tonnes of train travelling at 100km/hr. The carriages which adsorbed this energy were shattered if primarily wooden or crushed like a compacted coke-can if steel. The people inside were not restrained in anyway. At least the folk waiting on the platforms could dodge out of the way, although several of them were among the 112 who were killed and +300 injured. 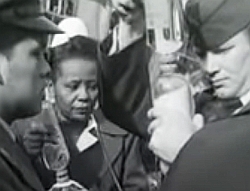 There were many heroes but many reports singled out Lt Abbie Sweetman USAF [L holding a drip] - The Angel of Platform Six. She was part of a medical team from a nearby USAF air-base who arrived asap after the crash and started a triage station on one of the empty platforms. Triage is where competent people make decisions about [further] treatment. It is a key skill where there are numerous casualties. David Nott, the MSF surgeon, recognised that triage was as important as treatment. It takes somebody with blunted affect to keep calm and carry on rather than go all to pieces. Lt Sweetman administered morphine to those most clearly needing its relief but she also marked their foreheads with a clear red M with her lipstick before shipping the injured to hospital. She also tagged the untreated (and so in need of extra care and attention) with X and explained to the ambulance men what the glyphs meant.

It was a lesson to the English paramedics, who as lowly "ambulance drivers" were trained to scoop and run. Getting the injured to trained medical staff in hospital with expedition. They were empowered by the example of USAF effectives that they could also stay and play and make a difference.

Another the past is a foreign country story is that of 14 y.o. boy scout Gilbert Powell who heard the >!crash!< and jumped off the bus to school to see what he could do. Being small and agile, he was sent in under the pile of shattered railway stock to see if anyone was still alive in there! There was a different baseline for health and safety in 1952, not least because it was barely 10 years since the blitz when you couldn't wait for someone in authority to start digging your neighbours out of the rubble. Poor young Gilbert got roasted successively by his father, his mother and his headmaster for getting his uniform dirty and being late for school.

My Son The Railway Engineer would like to add that the disaster at Harrow and Wealdstone - the worst peacetime rail-crash in Britain - gave significant oomph to the roll out of AWS advance warning system. AWS is a nifty system for bringing the signals inside the drivers cab and making them audible. It works by electromagnetic induction from devices installed between that tracks which is picked up by detectors on the train.  For a variety of reasons SPAD [signal passed at danger] is still a problem but AWS internalization is a step in the right direction.