I confess that I have only the haziest idea where Solomon Islands, the country, is. South Pacific but nearer to New Guinea? Ethnically Melanesian rather than Polynesian? Guadalcanal? Yes to all. And it's not Arthur Grimble's Pattern of Islands - that's Kiribati. Mount Popomanaseu on Guadalcanal, is 2,310m high so less at risk from climate change and The Ice-shelf Apocalypse than  the whole island on Ireland. But Guadalcanal is only the biggest, fattest and most populous of the 1,000 islands that string out across the Ocean between Bougainville [NW] and Vanuatu [SE]. Stats and Map.

I am sorry to report that, in my lifetime, 5 of these tropical paradises have been wiped off the map except in the memory of the last people to have a clam-bake on the islands. They are part of a barrier reef along the North coast of Santa Isabelrom the West:

These findings are the headline of a 2016 paper Interactions between sea-level rise and wave exposure on reef island dynamics in the Solomon Islands by Albert et al. Well that's how the Guardian treated the news in May of that year. 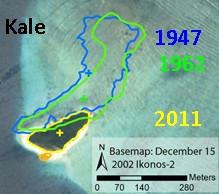 But the divil is in the detail. When you zoom into Figure 2c [L], you get the explanatory "Note: Kale Island was completely displaced by 2014". Kale, much battered by storms and greatly reduced in size, is still keeping its nose above the water. I guess that there is not a grain of sand left dry at low tide that was present above the tide-line in 1947, but surely its the same island by any sensible definition. It's the same with your pointy finger: every molecule in every phalange has been replaced since you stopped growing. The calcium phosphate matrix is in a state of dynamic equilibrium [TMI prev] with the circulatory system because calcium is essential for muscle and nerve function. Whatever about the detail, this is not looking good: Zollies is a straw in the wind for a lot of low lying archipelago nations. But remember that Amsterdam, Bristol, Cork, Dublin are all at sea level and will need to stockpile sand-bags. Did someone mention sand? That's disappearing into concrete at an alarming rate.
Lots more islands
Posted by BobTheScientist at 07:34