Away with the screaming couch

I was sharing an anecdote about blind in college and how one supervisor made a big difference by asking the right question: "What can I do for you that will let you live your best life?". Then hot on the heels of that trigger, I tuned into a zoomposium on being disabled [team pictured below] in graduate school organized by @DisInGradSchool; unsurprising that I got the link from Metafilter. A bit more surprising is that a year old YouTube on such an important topic should have accumulated 300 views and 3 comments. Then again, maybe not, only 6/6,000 people turned up to a pronouns workshop during Diversity and Inclusion Day in 2018. Poor us the consumer: limited time for YouTube and baskets of kittens vying for attention. 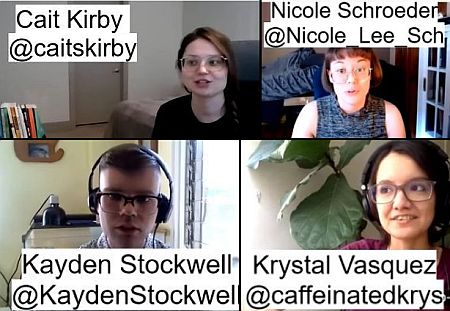 While we might be outraged if issues of Ableism in college were presented by a privileged white chap backed by a trust-fund, it is shocking that disabled graduate students have to work so hard on their own behalf to begin to approach the level playing field experiences of Able students. That is the key to Ableism - the trials and tribs of the dispossessed are largely invisible and probably inconceivable to those of us who are within the normal range [however in heckity that is defined]. Many supervisors of my acquaintance would begrudge their disabled students devoting time off the bench on such a public good venture as this zoomposium. But PhDs are rarely vocational [a PI might supervise >30 graduate students in a lifetime but only one of them can inherit the chair when the incumbent [finally! have they no rest homes to go to?] retires. It is all about the process because the average publications generated by an average PhD will be cited less than once and plummet to obscurity before the degree is won. A PhD is a licence to think for several years: investigate the unknown; navigate the landscape; avoid the pitfalls or make tools to climb out; critically evaluate data; cogitate independently; collaborate in buzz-groups. Putting together and scripting a zoomposium on disability; presenting it to the public; contriving a transcript and uploading it to YouTube is at least as much creative work as making a yawwnn poster to present at the annual conference.

Now here's the thing: The Institute and the Supervisor trust their students not to make up the data but they don't trust them about their own health conditions. To get a lien or accommodation because you are dyslexic, dyspraxic, autistic, visually impaired, mostly 'armless, consumed by cancer, weeping with pain, recently bereaved; you need to fill in some fatuous form in triplicate, draft a cover letter and get it all signed by a doctor, counter-signed by your boss . . . by their boss and your next of kin and then . . . you can get a week-long extension for an assignment. No wonder the disabled forego this humiliation and soldier on through the pain to the detriment to their own health and . . . [get this The Patriarchy] their productivity.

The zoomposium is entitled The Couch from a brilliant anecdote about how a PI accommodated his autistic graduate student during their one-to-one meetings: my advisor has a couch that is pink and plaid and very visually loud. And when I'm looking at him sitting on that couch talking to me, I can only hear the couch I have no idea what he's saying [laughter]. And I felt ridiculous telling him "I can't hear you over the couch." He took that completely fine, it was fine, and we move somewhere else and now I never have to look at that couch again. The [laughter] from his colleagues was so full of empathy and love.

What can the rest of us do, as colleagues, allies, supervisors, administrators?