The second week of November is Science Week. It was a bit piano last year, what with Coronarama but The Powers that Science are trying for a bigger splash this year. A national, multi-venue, several day festival needs a good bit of forward planning. [spoiler] Wexford Science Café has decided on a theme of Metanoia - allowing your certainties to be toppled by evidence. This is particularly on point because of the bunkers, barricades and tribalism which has been cemented by The Virus. I think the formal question put to participants will be "What have you changed your mind about since Wuhan?". The participants in the WSC gig in Science Week will mostly be, well, scientists.

Meeeeee! I cried, without really having a clue about whether I had changed my fossilized thought-cycles about anything since March last year. I find myself notably prone to availability error: I {gab | blob} happily on [and on] about what is uppermost in my 'mind' so I had a couple of ideas available which could be worked into a five minute piece-to-camera.  But my original idea, about the ethics of keeping small animals in homes, was bit edgy for pet-loving Ireland. So it was erasers out, and back to the tabula raza to think about my recent mind-changing experiences.

A tuthree weeks ago, when I was on the hill scything bracken with my neighbours and was getting talked at by one of them about the pernicious dockens Rumex obtusifolius & R. crispus which were taking over his pastures. This man is scientifically ignorant but not stupid and his solution was to spray the whole field with a dicot specific herbicide like by 2,4-dichlorophenoxyacetic acid aka 2,4-D [branded Trimec; I've blobbed about how this selective chemical works]. But, he said in his stream of consciousness, it will kill all the clover and I know that clover is, well, A Good Thing.  This same man used to say kidding-not-kidding that with modern farming if it couldn't be done from a tractor seat, it wouldn't be done at all. I turned away back to The Work and pondered how and whether a different view of docks could turn them into an asset. That's a well-trodden path of ponder since farming stopped turning stock into species-diverse meadows and embraced monocultures of Lolium perenne - perennial rye-grass - which tests have shown will get sheep and cattle up to market weight quicker than any other species . . . especially if you lurry on the nitrates. Docks are weeds because they are successful when all the other dicots have been done to death. 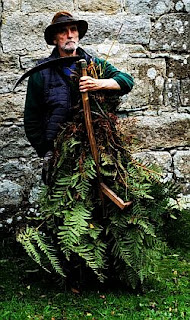 The very next day I heard Catherine "Sheepish" Friend talking about composting bracken and wool as a replacement for peat-based compost. Now that was a change of view-point about my previous six days of work trying to make bracken disappear rather than having sheep disappear into banks of bracken far higher than their woolly backs. I sort of knew that the old people used to harvest bracken as an available winter bedding which was thrifty but labour intensive. But this was a whole other view of the value of ferns. And right now the value >!for shame!< of a shorn fleece is about the same as a Mars bar and much less than a latte. As proof of principle, I went down to a field more convenient than The Hill and cut a generous sheaf of bracken [L] to add to the compost. Need some industrial espionage [or indeed some original scientific research] to determine the exact proportions of ferns to fleece.

Another option for surplus fleece is as packing for boggy walk-ways in Co Leitrim. [via G my KK correspondent]

Like Baldwin's of The Déise who started making ice-cream on the farm because it was tooo depressing to see their milk sold for half-nothing and turned into milk-powder. You can add value to things if you are creative and work hard on the marketing. Paddy and Joyce O’Keeffe, pioneers in the dairy-biz and founders of Tipperary Organic Ice Cream [prev] retired in 2008.