Maybe it's because we're the last farmlet in Co Carlow but I am endlessly fascinated by frontiers, borders and what lies beyond. In our case, it's a six acre field of Wexford cows. Most of the time you can tip-toe across the rocks of the R. Aughnabriskey, which marks the county boundary here, without getting wet feet. Don't try it during a wet Winter, though; the stream can be a roaring torrent 2m deep, ready to sweep you off your feet to an undignified battering death. 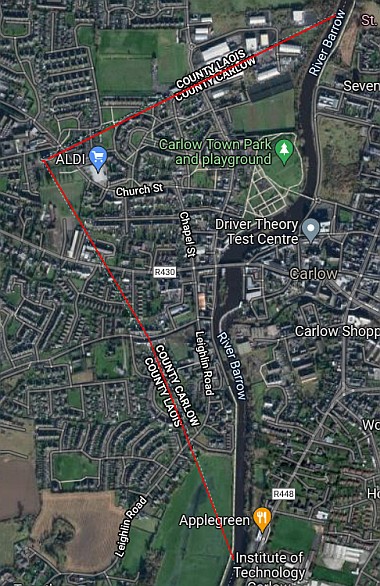 I was enticed to read at piece on RTE Brainstorm How Ireland's county boundaries define us, which was a bit rambling and unsatisfying given that title. But Dr Siobhán Doyle, a cultural historian from TUDublin, did have some interesting views on cases where the traditional county borders, frequently defined by rivers, have been modified subsequently to consolidate urban development. There are four cases, I am familiar with, two cited by Dr Doyle: 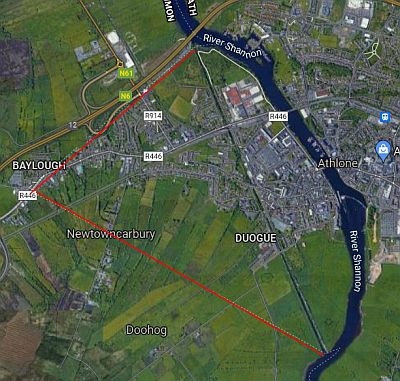 For me the most intriguing aspect of this map is the straight blue line which joins the two ends of the triangle of annexation. Zooming in on Google Maps confirms the suspicion that it is a canal: taking an efficient direct line while the Shannon takes a lazy eastward bight. The existence of this artificial water way was a complete surprise to me . . . and to The Beloved who spent all her school days in Athlone.

But the Athlone canal had not escaped the attention of Brian Goggin at Irish Waterways History.  Mr Goggin was an enthusiast who acted as a one man compendium of knowledge: the kind of chap who'd do really well at Mastermind. His website seems to be a clearing house of information and a regular port of call for fellow navigation enthusiasts.  Mr Goggin died last year and is clearly much lamented by his family, friends and correspondents.

The Athlone Canal was started in 1757 at the behest of the Commissioners of Inland Navigation. It was designed with a single lock rising 4.5 feet = 1.4m. The whole scheme was by-passed and rendered obsolete when the present weir and lock was constructed in the actual river during the 1840s. In Easter week 1989, we were moored above the "new" lock waiting our turn to descend when the sky darkened and a ferocious blast of horizontal sleety-snow swept the river. By the time we'd negotiated the lock and were on our way South to Portumna, the snow was forgotten and the sun burst out from behind the clouds. In Ireland we have weather, not climate!