No I'm not talking about the beautiful and highly effective 1917 biplane [R] produced by the Société Pour L'Aviation et ses Dérivés. That is now history, Here I'm going to treat of another deadly anachronism: the training of UK train drivers in the late 1990s. It is dedicated to My Son the Railway Engineer who designs signals for railways in England.

In Ireland, railways are really simple and so the signalling and collision avoidance protocols are correspondingly simple. Indeed for large sections of the network, entirely appropriate mid-Victorian technology is being used. Take the Waterford to Dublin line. It has half a dozen trains a day each way and for much of its length is single track and so bi-directional.  It is vital to avoid a situation where two trains are travelling at speed in opposite directions on the same track. 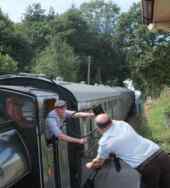 Accordingly there is a single token for the track between, say, Bagenalstown and Kilkenny, without which it is impossible to progress. This key is handed over by the driver [see L] of the Up train to the driver of the Down train while both vehicles are at Bagenalstown station (where the track is briefly doubled). You can see him crossing the tracks by the station bridge, carrying the token attached to a 50+ cm diameter key-ring. This is the cause of the delay all-too-frequently experienced on the Galway-Dublin line where you may pause interminably in Ballinasloe waiting for the Down Train to clear the line ahead.

In England, it is orders of magnitude more complicated. rail-lines radiate from London like the roots of a tree and the major hub stations might have a couple of dozen platforms scheduled to receive traffic from a great many more destinations.  Inevitably, for efficiency and space, there must be some sharing of track; some sections of track, which are constrained for width, may even need to be bi-directional. And travellers all want to get where they are going as quickly as possible. You cannot have people crossing the line with an out-sized key ring and exchanging news of the weather. Instead you have LOT of signals to tell train-drivers when to stop and when it is safe to proceed.

In the old days, these signals would be semaphores; later on the semaphores would have cleverly integrated lights [R] so that they could be seen from a distance or in the dark. Nowadays, lights are much more the order of the day. Typically, they will appear in series so that a stop sign [red] is preceded by a yellow light saying the next signal is red. The Boy is absorbing signal designer lore: the tales of [fatal] accidents caused by poor placement, poor weather, and equipment failures. All designers resolve to do better and the company has an elaborate system of checks to make sure nobody has made a silly mistake on the drawing board. Then they go out with boots, hard-hats and hi-viz jackets to see what the train-drivers see.  The gantry-lights that are obscured by the B7127 road-bridge until the last moment; the vegetation that is occluding line-of-sight on that corner outside Cosham, the blinding effect of the setting sun in Winter.

5th October 1999 was a bad day for Michael Hodder, ex-navy man who was now a commuter train-driver working out of Paddington for Thames Trains. He'd only been on the job for 13 days. The first 3-4km of the track from Paddington are bi-directional. Further out, as the routes diverge, it is possible to separate Up and Down trains, so at least all the traffic is moving in the same direction if it is moving at all. Hodder's train should have stopped in Ladbroke Grove to wait until it was clear to be switched onto the Down Trunk. Unaccountably, despite a yellow and then a red light, the little commuter train carried on through Ladbroke Grove station and rattled onto the main Up Trunk line into the path of an Intercity 125 from Cheltenham. The Intercity was doing what it says on its tin 125mph, or close to it, and both drivers were killed instantly. The residual diesel in the tanks of the 125 spilled out onto the track and ignited. In all 31 people died and more than 500 were injured: it was rush hour.

The subsequent enquiry made everyone familiar with SPADs, an acronym for signal passed at danger [red].  In the previous few years, out of Paddington alone, there had been at least six SPADs which by pure luck hadn't involved a collision. Poor Mr Hodder had been trained in how to drive the train only in the sense of how to make it go, how to make it go faster and how to make it stop. That was how it had always been done since British Rail days and back to GWR days. Nobody had made him ride the route with an experienced driver who would impart his accumulated knowledge of the track and its navigational difficulties. At Ladbroke Grove, the overhead signalling gantries were full of lights, only some of which referred to the line each driver was on; and the bright rising sun behind the commuter train may have colour distorted the red signal and made the yellow lights look as if they were on. Whatever these immediate causes, it was acknowledged afterwards that the signalling on that section of track could be improved. Tellingly, this had been acknowledged before the accident, but Railtrack's response had been to set up a committee to investigate; rather than sending people out on the track to see why so many SPADs were happening

Training (God, a pun, I must be British) is only minimally what goes down in class-rooms. My experience of learning molecular biology by the book was shown to be almost be entirely useless during a 5 minute conversation with an expert. You learn on the job by being presented with real cases, real operations, with an instructor beside you to make sure you don't kill anybody. And to be honest you don't really learn until you have a few near misses: that makes you realise what matters and where and when.
Posted by BobTheScientist at 06:27