My rant on Monday about cherish the children [♬ ♫ ♩ ♪] was an aside for today's update on SMA Spinal Muscular Atrophy a suite of inherited diseases which devastate a couple of dozen residents of Ireland and their families. Last time we looked at SMA, it was to showcase a new therapy Spinraza which could ameliorate the symptoms if a child was diagnosed early enough andif somebody would stump up €500,000 a year to inject the drug into the cerebro-spinal fluid 4x a year forever. The watchdogs of the public purse aka NCPE felt that we-the-people couldn't countenance such an outlay for so few beneficiaries. What galled me up a bit was that 12,000 people were prepared to sign a petition to persuade The Minister to over-ride the advice of his own experts but probably not able to stump up the actual folding money to achieve their started aim. It's the dilemma we all face whenever we bother to think about it: we'd rather spend the money on a) ourselves or b) on whatever is floating our boat this week rather than paying more taxes and letting the government make those decisions on our behalf.

SMA is in the news again because there is another petition to add SMA to the tests which are carried out on heel-prick blood-samples gathered at birth onto Guthrie cards [prev] and processed to early-detect progressive genetic diseases [including PKU, CF] for which therapies are available. Nope point in diagnosing conditions for which medicine has nothing to offer? This is a classic example of utilitarian thought, where you can, in theory calculate (QALY benefit of the therapy) ÷ (€€€€ cost of the therapy) and use this to decide rationally / fairly where a limited tax-take should be allocated. in 2019 NCPE said no to Spinraza. The additional cost to adding a tenth test to the existing Guthrie infrastructure is only €5 per heel or €300,000 a year to catch perhaps 6 de novo cases of SMA. Some EU countries already do this test. 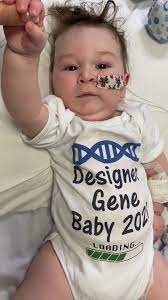 But there is a new therapy now which uses a once-off intra-venous delivery rather than a [short] life-time commitment to spinal <ouchy> injections. Spinraza works by geeing up the production of another gene SMN2 [for survival motor neuron] which is related to SMN1, defects in which trigger the adverse symptoms. SMN2 would rather have a quiet life in a mostly dormant condition, hence the need for repeated jabs to keep it delivering. The new drug Zolgensma is a complete copy of SMN1 which is packed up in an adenovirus and delivered adjacent to the cells which normally make the SMN protein. Adenovirus makes its living by being taken up by human cells and hijacking the replication machinery . . . to make more copies of adenovirus.

It has been the holy grail of gene therapy to insert "good" genes into cells with "defective" genes and switch them on to work in place. My former colleagues [Hi Jane, Hi Pete] in Trinity College Genetics have been pursuing this dream to cure retinitis pigmentosa RP for at least 20 years. So far no patent [but plenty patients!], let alone a working product. 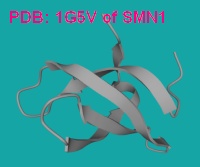 SMN the protein [structure R] is part of a complex which helps assemble another complex (the spliceosome) which processes genes into a final RNA form which can be translated into proteins. That sounds like an over-complicated I danced with a man of danced with a girl who danced with the Prince of Wales way of doing things; but in normal circumstances it works adequately. Evolution is about good enough, that will do rather than some perfectly crafted machina designed by deus. A single change Q136E in a single codon in the gene SMN1 prevents SMN the protein binding to ELAVL4 and so the first complex fails to come together and so (for want of a nail the kingdom was lost) cells, particularly some key motor neurons can't get their stuff together. But that Q136E lesion is just one of several ways in which SMN can go wrong: after all the protein is composed of 294 amino acids, any one of which has the potential to change. A111G, D030N are known natural variants which cause a milder form of neuromuscular degeneration known as SMA2. P245L and other changes cause SMA3 which is also rather less destructive of normal function.

Mais revenons nous a nos Zolgensmas. Zolgensma was approved for use as an orphan (minority use for rare diseases) drug by the FDA on 24 May 2019 and  the EMA on 18 May 2020. The Novartis blurb includes this telling disclaimer This press release contains forward-looking statements within the meaning of the United States Private Securities Litigation Reform Act of 1995. Forward-looking statements can generally be identified by words such as "designed to," "to halt," "hope," "can," "could," "possibilities," "potential," "leading," "excited," "milestone," "committed," "will,". I'd give a cynical chuckle at this point, except that my current take is that science has pulled a rabbit out of its hat this time. The fly in the ointment is that this single IV delivery costs €2 million. That's right on the cusp of what NCPE and their European oppos consider "worth it": 1 QALY being equal to €80,000.