In 2007, my pal Rene made me an offer I couldn't refuse: N=800 10 year old trees at €1 a go. They were mostly oak Quercus robur, but included chestnut both sweet- Castanea sativa and horse- Aesculus hippocastanum. Ten year old trees are the divil to transplant because the windage is enormous but the root-ball is small. Our consultant forester Rissoles Hayes advised splitting the largest trees into a) poles and firewood b) root-ball for coppicing. But we took a chance on the 50 runtiest oaks and planted them "entire" and staked them up in the most sheltered part of the site. The rest were settled each in its mini-digger hole and firmed down in hope. That all filled a week of hard graft and about a third of the (1 acre = 0.4 hectare) site - between us and the loud silver barns of our downhill neighbour.

The following year, 2008, we bought whips of Scot's Pinus sylvestris, larch Larix europaeus, ash Fraxinus excelsior. An EU forestry grant may have been involved but the spade work was all in the family. And the year after that, 2009, we filled in the final third of the site with more, smaller, tractable, oaks. And did I mention that we fenced off the acre and planted a hedge up against it - hawthorn sceagh Crataegus monogyna, blackthorn draighean Prunus spinosa and hazel coll Corylus avellana. Over the next few years, whenever I came across a sapling in the wrong place, I transplanted it into the hedgerow:  ash and wild cherry gean Prunus avium; three more Scot's pines; holly Ilex aquifolium, and with no effort at all a couple of sycamores Acer pseudoplatanus have self-seeded.

Fast-forward 13-15 years, the trees have grown according to their propensity and the local competitive conditions. Just take the oaks which were planted on 2m centres in early 2009. Some of these are as tall as the house and 15cm across at the base while next door will be a runt 2m high and as thick as a broom handle. There are also plenty of standing dead of various sizes scattered through the wood. These 2009 oaks came from the same supplier and were quite possibly acorns from the same tree but natural selection has culled out the weak. "Natural selection" including a lot of luck: local variation in the soil; access to better sunlight; a beetle choosing this bark to chew rather than that.

At the tail end of Winter we called in another forestry consultant for an appraisal with a view to selective felling / thinning of this mixed mostly native woodland. Kiwi Sean arrived a few days later, complimented us for the woods ["oh La, I'm sure you say that to all your clients" taps with fan] and said he'd come back the following week as he expected a window in his day-job as a commercial estate forester. A banjaxed back (occupational hazard in the profession) and 3 months later, Sean rocked up on a Saturday in June. The gestalt of the woodland was quite different as everything was now in leaf, which made species identification easier and everything danker . . . and the midges were out. Some of the ash were leafless, these poor babies are standing dead from the ash die-back and almost all are visibly affected by the consequences of fungal infection.

Thinning is a minimax problem: if you leave everything in place the trees crowd each other out and fast growing ash or sycamore will shade out the slower growing oak. If you let too much sun reach the ground, you'll have a riot of bramble, nettle and struggling seedlings of all sorts and varieties.  Thinning is also a technical challenge because in a dense wood it is damaging and potentially dangerous to fell out trees in the normal notch and back-cut way. Sean does a neat line in chunking - making an oblique cut in the trunk at shoulder-height, so that the top of the tree falls down beside its own roots - rinse, repeat.

Sean found us two days work and said to call him back in two years time. 13 years is a little early to thin for pure oak stands, but the shading from the ash - which is doomed before maturity - and the fact that we asked made an early pass possible and no insane. Foresters play a long game: in 100 years time the several hundred oak trees now will be reduced to maybe 1 dozen mighty champions with long straight trunks [if we prune off the side branches as high as we can reach] too girthy to get both arms around. Our dark woodland is now attractively dappled in the sunlight where shading side branches and ugly trees next to handsome ones have been laid low and clearings are filled with logs and brash. 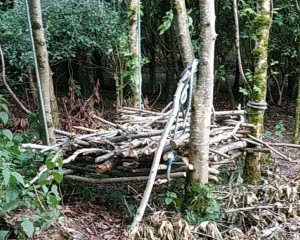 Kiwi has left the tidy up to us. I have the rest of the Summer to get "fire-wood" off the ground and into some variety of airy shelter so that the wood can shed about a third of its weight as evaporated water. It is much breezier out of the wood than in its own mossy shelter but I'd rather move light logs than heavy logs. I also have a more inclusive definition of what a log is. Foresters tend to treat anything smaller than their arm as brash and either push it through a chipper or leave it in the wood to recycle its nutrients. I, otoh, can get flaming utility out of something much thinner especially if it is conveniently straight [looking at you, ash] for stacking. Logs, especially small logs left in contact with the ground will soon enough be food for microbes rather than fuel for macrobes.  At the edge of one of the new clearings Kiwi had left a square of four ash "gonna be dead soon anyway, not worth my time and your money cutting down". I thought "pallet" or "bed-frame" and suspended four chunky straight logs horizontally from these trees. We then criss-crossed this base-line [about 50cm above the ground] with small branches for eventual burning. Really true long branches have been set aside for bean-poles or laundry props.