Phew wot a scorcher! used to be the red-top headline in England when 1960s temperatures inched over 70°F = 21°C; with pictures of young wans in their undies during their lunch-break in a London park. On Monday, Ireland recorded its hottest ever temperature of 33°C in Phoenix Park, Dublin. This national record was widely reported by newspapers with absolutely no skin in the game - it must have been a slow news day in Peebles - York - Surrey. If you follow any of those links, Monday's temp will be billed as Second highest temperature on record in Ireland rather than hottest ever; adding that it was 0.3°C below the record of 33.3°C observed at Kilkenny Castle on Sun 26 June 1887.

I hope you are with me in calling doubt on this KK Castle record if only for the extra .3°C spurious accuracy [multiprevs] alert. The Marquess of Ormond's gardener meteorologist was not recording temperature in Centigrade in the 1880s, that's for sure. Indeed for many years that KK temperature was widely transcribed and copied as 92°F because everyone likes a record. The original ledger is no longer available for comment.  But it probably looked like this entry from a weather ledger from Markree Castle Co.Sligo for 1-18 July 1922: 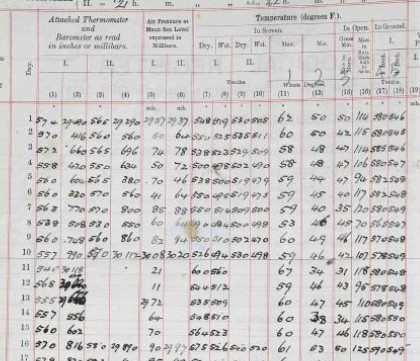 Even then, the default was Fahrenheit. The cited link to the Royal Irish Academy has a really interesting discussion of quality control for handwritten records: is that a 7 or a 9? I had a similar experience scoring blighted potatoes near Wageningen in the [scorching hot] Summer of 1976. For the next several days after experimentally infecting a field  of potatoes with a controlled dose of Phytophthora infestans [blight] we went to each 4x5 plot of spuds and gave each plant a score out of ten . . . on a dictaphone, for transcription back in the office.  The Dutch for 7 "seven" and 9 "negen" can sound close enough on a scratchy recording so the convention was to enunciate "survə" vs "nayChen".

Thing is that 92°F is an extraordinary datum - the only European national temperature record from 19thC - but pretty much everyone, including Met Éireann, trots it out with neither sanity-check nor health-warning. We should follow my pal Tony's advice about extraordinary claims requiring extraordinary levels of proof. Last year a team from Irish Climate Analysis and Research UnitS (ICARUS) gave the claim some welcome side-eye.

Other clever data-smoothing and crap-detecting methods were mobilized by the Maynooth team to cast more cloud on the reported temperature on that Kilkenny day in 1887 and I invite you to read the PDF with care and attention to detail. One really nice touch is the record number of authors on the paper: the entire class for the 2019-2020 cohort of the MSc in Climate Change were tasked collectively to chase down and crunch a lot of historical met data. This must have been as galvanizing and inspirational [real science coal face alert etc.] as me helping isolate yeast mutants with my peer-group in 1974.

My pal Denis [prev] was visiting the night after the Phoenix Park scorcher and started the mind-hare running that skeptical metadata analysis existed about the 1887 heatwave. His sardonic assessment of lonely dot in the graph for June 1887 temperatures is that it is not real science. In his experience egregious outliers in any scientific dataset are ignored, airbrushed or explained away with articulate arm-waving.