A water-thief κλεψύδρα klepsydra is an ancient tool for getting an accurate handle on passing time. It relies on the molecular uniformity of water, much as an egg-timer relies on well sieved sand, to pass through a narrow opening at a regular and reproducible rate. 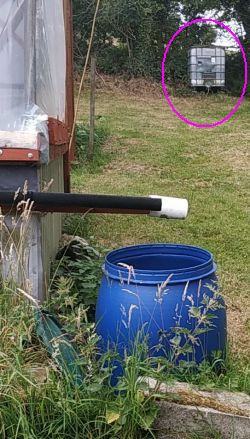 One of the issues with a polytunnel is that it never rains inside. That's fantastic for drying laundry but does commit tunnelistas to transport sufficient water to any plants which they choose to grow inside the structure. In an ideal world, the 900 mm of rain which falls on our farm each year would come a) during the night b) every third day c) at the rate of 7.5 mm / day. But Irish weather isn't as biddable and we have been known to receive a destructive 75 mm in 24hrs. That excess washed down the hill taking much of the roadway with it. I have installed a number of nifty fixes [gutters, rain-barrels] to capture enough rainwater to see the beans and tomatoes through any dry spells.

The ultimate back-up is a 1m tonne UBC [(R)]set up next to the compost bins whose base is about 2m higher than the roots of the tomatoes.  It is high Summer; there hasn't been more than a spit of rain for at least two weeks; and tomatoes are thirsty . . . not to mention the parsley sage rosemary and thyme which also need their wet. I have accordingly been draining the top UBC into its lower sibling to swell the reservoir of useful irrigant. I've plumbed in a half-inch pipe to the bottom spigot of the back-up UBC. It's little faster than watch paint dry, but only a little. I needed to find out how long it took to drain a set amount of water. That was I would know whether I had time to knock up a batch of scones or only time to make a cup of tea before having to nip up the steps to switch the tap to Off. 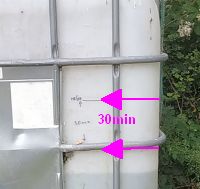 But marking the water-level with a permanent marker and returning 30 minutes later, I was able to determine that the drainage rate turns out to be 300 lt / hour. My UBC is not really a water-clock because my phone is much better at telling the time. Calibrating the rate is a sort of reverse klepsydra or as it might be Ardyspelk.
Posted by BobTheScientist at 07:20