We were gathering at the bottom of the lane prior to a session on the hill thrashing the bracken Pteridium aquilinum, in a (probably vain) attempt to create more fodder for sheep. And a more diverse flora to delight the eye and the various bugs and insects who eat those plants. Nothing eats bracken, that is why it grows so abundantly across the uplands. I had, accordingly equipped myself with scythe and lunch and a bottle of water. Everyone was at a loss when our leader asked "Before we go up, does anyone have a club hammer and a bolster chisel in their vehicle?". It's not a crazy request - the collective trunks of half a dozen farm-jeeps is likely to hold: antibiotic vial + syringe; baler-twine; calving-jack; dog; empty pop bottles; fork; ratchet-straps: screw-driver: tarpaulin jacket: vice-grips; wire-fence roll . . .

I had the required tools at home - somewhere - and said I'd pick 'em up when we went past our gates. And it was so! I was late to the hill because although I had a clear image of the chisel on a shelf, but not the shelf in one of three widely separated places where I store tools.

The problem was that, when we up-graded the Mountain Gate at the corner of the commonage, we installed a previously owned wrought-iron pedestrian gate. This nice bit of history was hinged on a wooded stake but closed against a rough granite pier which in turn hinged the much heavier iron vehicle&flock gate. The pedestrian gate was meant to be secured by an integral bolt slotted into a hole drilled into the pier. But it was a awkward fit and far too many visitors left the gate improperly secured and stock has escaped both ways many many times over the tuthree years since the gateway was upgraded. I'm not stupid, and I can bodge things up but nobody would call me handy. I therefore went up to the nearest group of fern-cutting neighbours proffering the hammer and chisel and inviting them to swap tools for a few minutes. Nope! There was a collective shaking of heads "You'd be at nothing there, Bob; that granite is quare hard; it would be easier to give the wooden stake a nudge". How hard is quare hard, I asked myself, and trounced back to the gate to find out. It was quite clear where the small gate was binding because there was a rusty smear on a granite wart about the size of an egg. 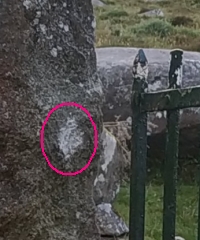 Much less than 5 minutes later, the rusty smear had been <tok> <tok> <tok>  replaced by white patch of unweathered granite [zoom L] which was ever so slightly concave . . . and the gate easily swung so that the bolt opposed its bolthole. I was quite chuffed. I live in my head rather too much for comfort; and a lot of that time is spent trying to imagine the perfick solution to a problem. My farming neighbours have taught me that good enough works too: often coupled with let's get this done. In fairness to the work-on-the-wooden-stake school, I notice that although the bolt is opposite its bolthole, it would slide better if the gate was raised by 5mm. I think that can be achieved by tricking about with where the upper hinge passes through the wooden stake and is secured with two nuts. Next time I go up the hill I'll bring me a spanner and test that hypothesis.