Lakes are placid. There is even a place called Lake Placid. Lakes are flat and wet and you can go fishing on them. Generally they are not dangerous unless you go out in a boat which is beyond your competence to control when the wind gets up . . . like with Dau.II and I went sailing on Lough Derg in 2014. We didn't drown, we just wet ourselves, unlike the lady who owned one of the cruisers in the marina. She fell into the water coming back from the pub and didn't come up. She thus became a statistic joining 114 people who drowned that year in Ireland. When lakes cease to be placid and start moving, they become massively more destructive of life and property. 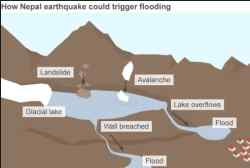 I came to Glacial Lake Outburst Floods GLOFs when I was doing a bit of youtube research on supraglacial lakes. I was delivered to a series of GoPro videos about tourists swimming in the most dangerous lake in the Himalaya. The most dangerous lake seems to be any Nepalese lake to which you can trek a) a tourist and b) a GoPro camera. The trope is that inserting a couple of white bodies into whichever particular lake might raise the water level sufficiently to over-top the terminal moraine that is holding back the water from the valleys below. A terminal moraine is an accumulation of debris ground up from the earth by a glacier and deposited at the current end of that slow-moving ice-river. The BBC diagram [R] shows a glacier, a glacial lake and a couple of potential causes of failure in the retaining wall of the lake. It was part of  a report on the aftermath of the Nepalese earthquake in April 2015. An earthquake could be the trigger to allow gravity to work on rocks or snow overhanging the lake. The Blob looked at a 1963 disaster where a tsunami caused by a 1963 landslide overtopped the Vajont Dam in Italy and slopped 50 million tonnes of water into the densely inhabited valley below. There are 2300 glacial lakes in Nepal, often in desperately remote regions, but the Nepalese government endeavoured to survey them all after the earthquake to see if anything had shifted.

To see if anything has shifted, you need to have established a base-line for each lake. There is no better argument for the benefits of science and data-collection at times when things are quiet. Disaster management, after the event, is an entirely different department. Here's a short docusnippet about an unnamed glacial lake in Nepal - number 454 - which has lumps of solid matter hanging over its pure blue surface and a terminal moraine some distance away. You may be certain that any lake-retaining terminal moraine is going to be built to lower engineering specs than the dam in Vajont. So, as water starts to move through any small gap in the wall of debris, it will erode the hole making it deeper and wider, cranking up the flow of water until a new much lower equilibrium water height is achieved. You have to hope that this will not happen catastrophically in the middle of the night: lots of people live in valleys, such as those below moraines: that's where good topsoil accumulates. Many glacial lakes are in steep-sided glacier-eroded valleys and have been accumulating water over many decades, so they are deep and have a lot of water to send to lower levels. Imja Tsho, one such lake, was a few ponds in 1962 and is now 1.3 sq.km in area and an average 40m deep. Call that 65 million tonnes. Imja is of particular concern because of the speed of the rate of increase in its volume.

Geomorphologists are convinced that the English Channel / La Manche the long funnel-shaped body of water separating England from France is the product of a catastrophic failure of the ridge known as the Weald-Artois Anticline [the ridge shown L that used to bridge 'england' and 'france']. Once upon a time the North Sea was mostly solid underfoot and has been given the name Doggerland but it contained a huge lake. An event lost in the mists of time provided the tipping point to empty the lake at a maximum rate of 1 million tonnes a second. We know less of the sea-bed than we know about the surface of the Moon but a sonar survey revealed a bathyscape swept in an East to West direction as if by rushing water. I use the word bathyscape to match landscape, seascape but the interweb wants it to mean bathyscaphe [piccardprev], a vehicle for exploring the depths. That's how little we know about the sea-bed - we don't even have a word for its vistas.
Posted by BobTheScientist at 07:10