I'm not really down with popular culture because we don't have the telly in the house. This means that I've been left out of a lot of lunchtime chit-chat at work. When Big Brother came out, I was working in St Vincent's Hospital in Dublin and I was amazed at how a dozen, educated and intelligent people with multiple degrees could get so engaged in such an introspective, self-indulgent and fundamentally cruel show. Competitive socialisation, it might be called. I do get to listen to the wireless when I'm driving to and from work, so I do keep up with what's going down to a certain extent. Three media events have popped their heads above my limited horizon.

First was the news that The Great British Bake-off has been sold to the highest bidder at the end of its current contract with the BBC and the highest bidder is UK's Channel 4. This is a key element of the week's entertainment for Dau.II and her bloke in Cork. They sit on the sofa and watch each episode on Netfix at a certain time each week. I've caught fragments of episodes when I've been staying with Pat the Salt on Sunday nights and it's okay if you like food and baking. Before she left home, Dau.II watched 168 hours (a week) of Masterchef with Gordon "This chicken is RAW" Ramsey and I'd often sit it out with her. It's quite shouty. The GBB otoh seems to be, and I'm not the first to remark on this, kind. It is a competition, there are losers but folk help each other out if they drop their petit fours on the deck at the last money. Nobody, as happens once an episode on Masterchef, has their attempts dumped, plate, cutlery and all, in the bin. Their loyal following is worried lest everyone now starts to wear Magimix tee-shirts and Betty Crocker hats.

Gogglebox is moving to Ireland!! This has been an enormously successful and likeable review of the last week on the television carried out as reality TV. Snippets of the week's programming are intercut with comments from a dozen 'normal' families who have been persuaded to have cameras in their living-rooms. Reviews of TV before 2013 were common but given by media people. The Irish programme is going to cover such key elements of Irish culture as The Angelus and Jaffa Cakes. I thought I'd check out the British programme on youtube to see what I was missing. And near the top was a 10 minute clip called Educating Yorkshire, which you should watch. It's about an awkward and lumpy young chap, in a school uniform perhaps suitable for someone 5 years younger, who has to do an oral English exam but is going to struggle because he has a crippling stammer. The story hinges on the resourcefulness of his English teacher who won't have his boy bett by the system. One of the telling snippets is when a loutish teenager loses patience with the protagonist trying to introduce himself, but then mumbles a shamefaced apology when he realises the other chap has a stammer. If you're a working-class teenager, brutalised by your peers, failed by your school and dispossessed by society then showing compassion is enormously difficult; perhaps more difficult than coping with a stammer. It all works out in the end and a lot of tissues are passed across a lot a sofas. If you're used to the culture of TV, the restless jumping of viewpoint, the editing to sound-byte and the quietly insistent commentary, you probably don't get the feeling that we are all being manipulated to feel good about ourselves and about each other. You simply feel good about yourself without all the qualifications. 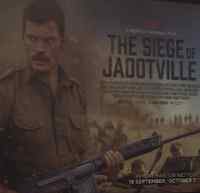 This week also saw the Irish launch of a Netflix original full length movie called the Siege of Jadotville [See poster L]. It's the story of a heroic episode in the débacle of the UN mission to Congo in the wake of that sorry country's independence from Belgium. It had started as the private fiefdom of King Leopold II of Belgium in 1885. The grotesque exploitation of of the indigenous people by a rapacious soldiery working for the monarch were exposed by Irish diplomat Roger Casement in 1904. Almost immediately after independence in 1961 Katanga, the mineral-richest of the four provinces, seceded from the union and civil war broke out. Ireland was one of 30 countries that sent a peace-keeping force. In September 1961, 'A' Company, 35th Battalion under Commandant Patrick Quinlan was sent up-country to protect the citizens of Jadotville. They were hung out to dry by the UN, who had bigger fish to fry, and Cmd Quinlan ordered his men to dig in on a tight perimeter to defend themselves. Over the next six days 'A' Company fought off a horde of Katangese mercenaries that out-numbered them by 20:1 until, out of ammunition, food and water, they surrendered. They were understandably reluctant to do so because it was less than a year since an Irish patrol had been massacred by Baluba tribemen in another part of the Congo. Lt Gleeson, the patrol's commander, is commemorated by a stone plaque near the bus-station in Carlow. All of 'A' Company survived the siege and their subsequent incarceration and were swept under the carpet of history. Until now. Podcast about the Siege. Recalled in song.
Posted by BobTheScientist at 07:42