There was a time, while I was young and disaffected, when I maintained that manners were largely a bourgeois charade; a form of words that was frequently empty of feeling and often hypocritical. It took me time to realise that manners is about making the people around you feel comfortable. You don't, for example, huck a lunger and gob on the ceiling while eating dinner . . . even in your own home. I went down recently to our lifelong learning centre at The Institute to get some educational material for a pal. When The Help went into the other room to get the brochure, I heard a paroxysm of coughing and thought "someone should be at home in bed". That someone was The Help and she coughed again and copiously into her hand before using it to give me the brochure. Eeeeuw! Most of the people I know agree that these sputum-related events are bad manners. But using the wrong fork, or holding your knife like a pen or drinking from the finger-bowl . . . are these equivalent-grade breaches of good manners? No, they are rather none-too-subtle signals to your fellow diners about your class or nationality.

For the last many months, I've been going with Pat the Salt, my esteemed but getting-vaguer father-in-law, to his local Community Hall every Monday fore-noon. A group of maybe a dozen old timers - Pat is the oldest and I'm the youngest - meet to talk about local history and heritage. One of the old chaps has been a keen photographer since he was given a Box Brownie as a nipper. To pursue his Art, he's moved with the times through successive technologies and now is all digital. The photography has led to other aspects of computer-literacy and now he's offering to teach his peers to send e-mails. My Uncle mastered that and word-processing on his own at the age of 78 because he wanted to communicate with other people who had long ago thrown away their quill pens. The killer app for Old-wans is, of course, The Skype: talking to remote grand-children is just grand, even if the picture quality is kinda crappy. 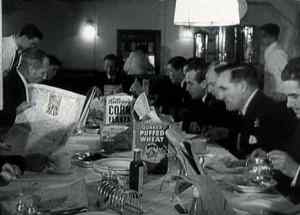 Monday ten-days, the talk fell to moaning about a) how most of them were outside the digital world and b) most of their grandchildren were far too deeply in it. They spend all their time tricking about with their devices . . . they never read a book . . . ignoring people around them . . . it can't be good for their eyes  . . . even at the dinner table. With that in the back of mind, a couple of days later, I was soaking in a warm bath of 1950s nostalgia on youtube and caught a picture [R] of what their generation did during breakfast in 1952. Well what the officers did in the HMS Illustrious wardroom: rather than talking to each other they all read the newspaper while scoffing Corn Flakes - early example of product placement here - and tea and toast.  The ratings otoh get a fry and are full of chatter.  Either the Financial Times was only available to Grade VI and above, or the working jacks didn't have any stocks and shares to track. 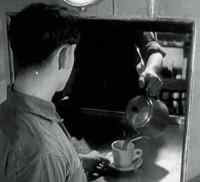 The film is called 'Tiffy' Naval Artificer (1952), and it's worth watching as an example of all-round competence. Tiffies can fix anything material - wood, metal, electrics, plumbing - someone has to when you're at sea.  You can't call a plumber out from Portsmouth for a blocked drain if you're in the middle of a storm off the coast of Iceland. Sailors are famous for being 'handy', they can sew anything from a shirt-button to a mainsail, for example; so long as there is enough hot and strong tea [L]. Tiffies are sort of super-sailors in this respect: they are artful bodgers and problem solvers. That led me on to another film about the same craft 20 years later. The Artificers (1974) is much less of a documentary than the earlier film; it's more of a propaganda / recruitment vehicle. The narrator [uncreditted] has an uncannily familiar voice which had me scratching at the rump of my memory. It's Sir Ken Robinson the famous TED talking-head on creativity in education. The other oddity to modern eyes is that everyone, officers and ratings, is sporting 70s sideburns. David Lean didn't notice Julie Christie's anachronistic hair in Dr Zhivago.

As well as rarely saying thank-you, there was another thing I was certain-sure I was never going to do when I was growing up. As a navy-brat, there was no way on earth I was going to go to sea. I've often reflected from the Gates of Too Late that it wouldn't have been a bad life or a bad training.
Posted by BobTheScientist at 07:08