Last year I was maundering on about camels, which allowed me to give hats off to Wm Shagsper with Hamlet teasing poor Polonius for his obsequious agreement "very like a whale" etc. with whatever His Prince suggested. Since I discovered the Wexford Rissole, I've been chuntering on about their virtues to anyone who would listen. By the Mass, I even induced Young Bolivar to try one as we spilled out of The Sky & The Ground after Science Café a couple of months ago. It was more complicated than you might think because there are two sorts of rissole - battered and breaded - which each have their staunch supporters. The [Polish] woman behind the counter asked what we fancied and explained, not really helpfully, than most people preferred them battered but she leaned toward bread-crumbs  . . . or the other way round. It would be unchivalrous, she being young and pretty, to reject her preference but perhaps foolish to reject the majority opinion. So we ordered one of each.  And very nice too: hot, tasty and not requiring a disposable fork.

Since she moved down to the Republic of Cork 3 years ago, Dau.II has been talking up the Cork potato pie as the local equivalent to the Wexford Rissole. When her sister was visiting in July, they ordered two of these crudités and received two objects the size of a baby's head. That would have been okay, except that they had an order of chips as well. Even Dau.II's bloke struggled, and he can capably trencher through a 800g sliced loaf if given a toaster, 200g of butter and half an hour. 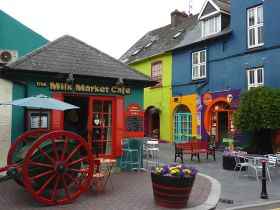 I was down in Cork last weekend, launching Young Bolivar into a hostile world. I took the chance to hang out with Dau.II for 30 hours before the work goes mental at The Institute. On Sunday forenoon we piled into the Little Red Yaris and drove out to Kinsale for a walk. Cork has, over the last 50 years, developed as the foodie centre of Ireland and Kinsale is the Capital.  Of course the Real Capital is the English Market in Cork City Centre but that is almost too concentrated. The smells of coffee and cheese and salami and olives sends a rush of blood to the head. Kinsale [R] has more restaurants with more stars than any other town in Ireland. The planning office puts no limits on the use of paint and sometimes the clash of colour is exciting but unfortunate. After wandering around for a while and meeting folks - Dau.II's bloke and his brother seemed to know every busker and artist in town - we called for lunch and washed up in Dino's Family Chip Shop on the quayside.

We all ordered the kind of stuff you can buy in a chipper: chips, chips with cheese, fish, fish-cakes, and lurid coloured drinks. I took a battered sausage and a battered potato pie. The battered sausage was entirely what you would expect: pre-cooked, heated up in piping hot oil and 'robust' of flavour. But 'tis a long way from a rissole that the Cork potato pie was r'ared. What it appeared to be was a small fist of mashed potato lightly seasoned with salt and pepper and covered in chipper's batter like my sausage. A rissole has substance because it is recycling any old crud that is found around and behind and under the fryers at the end of the night. Now I have to confess that, while I still have my own teeth, I don't believe in mashed potato, even if merely a vehicle for butter and cream. It's not a food for infants who are following baby-led weaning [and all kids should be onto that]: they prefer a chunk they can pick up and gum at. Mashed potato too often has the consistency of the baby-rice you can pour from a packet and mix with water. There are plenty of fine authentic Irish recipes incorporating mashed spuds: colcannon, champ and boxty for example, all good. My Great Uncle Walter, fabulously wealthy from coal being discovered under his family estate in Northumberland, lived out his declining years in Budleigh Salterton on the South Devon coast, where the average age is about 65. We were certainly the only children on the beach when we used to visit him and our eccentric Aunt Lily who may have been married to him. ANNyway, Uncle Walter subsisted on Complan and whiskey. He probably ached for mashed potato as something to chew on for a change.
Posted by BobTheScientist at 06:04