There may be science going down in your back garden [tribs to back-yard scientist Louis Agassiz] but there is no scientific progress without publishing it: getting it out on record and into the public domain. I've written a bit about getting your work out as a publication and how too much published material is doubtful at best, utter crap at worst. How to present your stuff at a meeting, though? If you work in the Arts Block you write it all down before-hand in long-hand, step up to the podium and read it all out again. Science is usually more complex than that so requires some audiovisual aids to present the data. Mathematicians face the black-board and mumble as they cover the board in equations and themselves in chalk-dust. I've been doing science and presenting it since 1977 and technology has moved through several phases since. 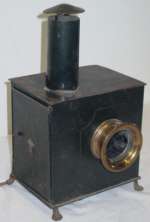 A couple of weeks ago, I was at my regular Monday session with Pat the Salt and his elderly pals. It was the meeting when they try to set an agenda for the year and the topic of getting wired came up. That moved onto giving talks and having a projector and Powerpoint. One of the more lucid and educated old fellers suddenly said "Epidiascope" and looked to me for confirmation. I wasn't totally sure what he meant - I'm ten year younger - but the word rang a bell as a) a method for projecting stuff onto a screen b) 19thC. We resolved to go look it up and I here [R] present a picture of a wood-burning stove an epidiascope. The chimney is present to help dissipate the heat from a powerful incandescent light-bulb. I guess earlier models used a lime-light mantle over a gas flame like for theatre foot-lights. You need a lot of light because you only project what is reflected - transmission through 2x2 slides or OHP acetates requires less energy. In the epidiascope it is all done with mirrors and lenses. It's neat though because you can show the thing [fossil, beetle, rock] itself rather than a 2-D representation.

I think my dates with Pat have come to an end because I'm back at work in The Institute and my current timetable has a class between 0900-noon on Mondays. Ho hum, sad enough but my commitment to The Youth must have precedence because that pays me and they're going to live longer. The Institute has lashed out €10 million on a new Teaching and Learning Centre which they have named after local man Samuel "Long-drop" Haughton [bloboprev].  I'll be teaching one class a week in the new building and attended an orientation session there last Thursday. There is no black-board! And no chalk. There is no white-board. The larger theatres have two projection screens (aka a large white wall) which can be worked in AND / OR mode. So you can, for example, show the same stuff on both screens or have the left screen showing a slide full of Powerpoint bullet-points and the right-screen carrying a video.  And they have an epidiascope!!  So Retro, darling.  It doesn't have a chimney, though: it's basically a down-pointing camera like I used to make crude black&white 35mm slides 35 years ago. Except that this is a video camera. If I want to write something for display, I have to slap a slab of paper under the camera and scribble on that whence it will be broadcast in real time onto the wall behind me.

One of my waggish colleagues suggested that if our hands were going to appear 6 feet high on the wall, we'd better make sure our nails were clean. And that started a discussion about catching the dreaded lurgies from using a keyboard, wearing gloves to combat the same, sleeping in hotel beds and bringing an autoclave to restaurants for the cutlery. Unless we have OCD, most of us give a token rinse to wash our hands after a visit to the 'bathroom' and then spend the rest of the day handling money which is a known reservoir of fecal coliforms - filthy lucre indeed.
Posted by BobTheScientist at 07:50