Skip all this if you want the 4 minute video answer from Hank Green. 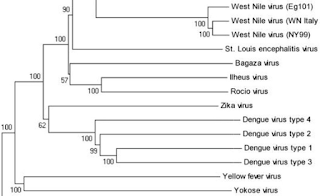 Zika is a Flavivirus related to those that cause yellow fever, West Nile Fever, and hepatitis C and very closely related to Dengue Fever Virus. [L: fuller picture on web]The family is named for Yellow Fever Virus, which in turn is named for the bright yellow colour you turn if you catch a dose of YFV.  I was doing Yellow Fever earlier in the year mainly in order to set the scene for the emergent Zika health scare which is making the news on a regular basis in 2016.  I've also mentioned West Nile Virus because of its peculiar relationship with the immune system and HIV: a delta-32 mutation in CCR5 confers substantial resistance to HIV but lays you more open to attack by WNV.  That's really interesting because it hints at the multiple assaults which have shaped our immune system to work effectively most of the time. We shout and complain when we catch something dreadful but don't give credit for the innumerable times incoming viruses and emergent tumours are knobbled before they get a toe-hold. Zika is nothing like Ebola EBOV [bloboprev]; which is an a totally different family and will kill not only you and your fetus but is likely to wipe out your entire village. With Ebola, your liver and kidneys shut down and you bleed from all orifices until you die; which takes a couple of weeks.  Nasty.

One of the peculiar observations that tells us that evolution is shaping the system is that when you align the sequences of Flaviviruses to determine which varieties are closer to each other and which more distant, they fall out into family lineages. That's not so surprising because the analysis inherently works towards that outcome - it's circular. What is unexpected/independent is that the vectors (Aedes mosquito, Ixodes tick, Culux midge, shared needle) that transmit the viruses very closely track the relationships based on sequence similarity. [picture]  In the picture shown at the top of this Blob, Yokose virus [at the bottom] is flagged as "no known vector". You may bet €5, but not €5,000, that it, like its cousin YFV is carried by mosquitos rather than ticks and midges.  This onservation doesn't cut both ways, Culicoides midges can transmit a variety of other blood-borne viruses including Schmallenberg which distressed sheep-farmers in Ireland a couple of years ago.

Schmallenberg is interesting because it is mild in its symptoms, unless the ewe happens to be at a certain stage in her pregnancy, then you can see a number of non-fatal fetal abnormalities most disturbingly associated with the central nervous system. Remind you of German Measles / Rubella? . . . Remind you of Zika?  Because that's the whole story really with Zika. If  you have a Y chromosome or you're not preg, then Zika means sniffles, perhaps a rash and you get over it.  In your first trimester and Zika may be doing a job on your fetus.  Some doctors are certain-sure that is the story: Zika is like Rubella or Schmallenberg in giving a hard knock to the fetal brain to prevent its development and causing microcephaly - which is unaccountably difficult to commentators to pronounce. I think most people, if they don't give up entirely, would say Micro Seph Ally - soft C because it precedes i or e, because that's the rule in Latin; although it really should be Keph because it's from the Greek κεφάλι. Some epidemiologists are not-so-sure because, although there are 4000 extra cases of microcephaly in Aedes-infested regions of Brazil, there has been no such spike in cases across the border in Colombia.  Others have noted that there were more unreported microcephaly cases before the appearance of Zika. It's difficult to conclusively establish the connexion between Zika and microcephaly at least partly because the symptoms are so mild in the mothers:
"Have you had the Zika?"
"No, no not me, I've always been in the prime of health"
and of course, conspiracy theorists are muddying the water with the suggestion that Monsanto is to blame for this along with everything else that is wrong with our world. Pyriproxyfen, an anti-mosquite spray which is being blamed for causing the birth defects, does kill insects by inferring with their development but it's far too simplistic an explanation given the current data.  And whatever explanation of microcepaly you listen to make sure that it is data-driven and not mere correlation based on a small sample size.  A cure requires us to nail the cause, not describe the sequelae or symptoms or associations.  If you look at TV ownership and suicide rate in countries across Europe you can find a significant correlation but no sane person suggests either that TV drives people over the edge or that suicidal people buy more televisions to brighten up their lives. Rather, both of these phenomena are well known symptoms of higher standard of living.
Posted by BobTheScientist at 06:47