Infections caused by YFV, yellow fever virus, manifest a variety of distressing symptoms, fever, headache, chills, back pain, fatigue, loss of appetite, muscle pain, nausea, and vomiting.  It's a bit like Darwin and his Chagas Disease without so much farting.  It takes about 3 days for your always-on innate immune system to bring the infection under control and for 85% of cases, that's it: you feel crap for half a week and then you've acquired life-long immunity.  The remaining 15% takes a grimmer toll, entering a toxic phase of establishment in the body involving recurrent fever, liver damage resulting in jaundice and bleeding into the intestine. Pirates and other seafarers on the Spanish Main, called it Yellow Jack or Bronze John from the jaundice whereas colloquial Spanish called it Vomito Negro from puking up the blood.  Yellow fever was probably endemic in Africa until its range was extended to tropical America: probably carried in the blood of a slave. When presented with illness as a percentage, most people fail to emote very much.  Perhaps you'll wake up to the problem when I say that, according to WHO, 200,000 people contract yellow fever each year, of which 30,000 die in a bloody mess - enough to fill a medium sized football stadium or populate a small city.  Malaria, by contrast and comparison, kills a million people each year I - II - III - mostly black babies. 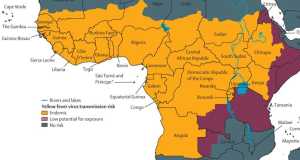 Some viruses, like Ebola, can be transmitted directly from person to person, with more or less efficiency.  Many other viruses have found that propagation is easier if they hitch a ride in a 'vector'.  In the case of YFV, the vector is any one of a handful of species of mosquito, primarily Aedes aegyptii.  Like I danced with a man who danced with a girl who danced with the Prince of Wales, you get your dose by serving as a blood meal for a mosquito that has previously dined on another infected person. The mosquitoes which bite are all female, adult male mosquitoes don't feed - they are just sperm-donors. The symptoms are so generic that your doctor will need to know where you have been recently before making a diagnosis. The virus and its vectors only thrive in a rather precisely delimited band across tropical Africa - and an equivalent band (mostly Brazil) across the Atlantic.  If you're going to tropical Africa - get vaccinated, it will be better in the long run.

Yellow Jack famously brought a stop to the building of the Panama Canal.  Ferdinand de Lesseps, French engineer, knocked off the Suez Canal in 10 years 1859-1869 at a cost of £100 million. It required the removal, by digging and dredging, of 100 million cu.m of spoil but connected the Med with the Red Sea without using locks. There is a small difference in the height of the water at either end of Suez but not enough to make a difference to navigation. de Lesseps was then persuaded to do the same thing at Panama.  Should be a doddle: it's only 80km across compared to Suez's 190km. They started work in 1881, shifted almost as much spoil as Suez but had made less actual progress when the company went bust in 1889, costing the shareholders $260million dollars and the workers +20,000 lives.  Many of the casualties were from Yellow Fever and malaria but sketchy health&safety, poor planning and faulty engineering decisions added to  the toll taken by landslides, accidents and drownings. Nobody knows exactly how many people died under the French because they only recorded deaths in the company hospitals.

We like to think that the French led the way [behind Louis Pasteur] in understanding the role of microbes in human and animal health.  The microbial basis of malaria was cracked by a British Army doctor Major Ronald Ross in India who observed Plasmodium cells in the gut of an Anopheles mosquito.  He won the Nobel prize in 1902. When US imperialists became convinced that American interests would be served by acquiring the French assets in Panama and finishing the canal, one of the first people sent out there was Col W.C. Gorgas,  of the US Army Medical Corps. Gorgas recognised that killing the mosquitoes and/or reducing their access to people was a logistical problem such as the military are uniquely well equipped to prosecute. It was multi-pronged:
The last idea worked surprisingly well: far more successfully that similar schemes to eliminate much larger pests like pythons in Florida or red foxes in Australia.  The preventive measures, although aimed primarily at reducing malaria rather than the less debilitating yellow fever, seem to have been more effective against the latter. This is partly due to the different lifestyle of the diseases' two vectors: primarily Aedes spp. for yellow jack and Anopheles for malaria.  The other obvious difference is that malaria is caused by a single-celled protozoan parasite and the other disease by a tiny virus. The virus gave its name - flaviviruses [flavus is Latin for yellow] to a whole family of related plague-causers: Hepatitis C virus HCV [previrusly]; Dengue Virus DENV; West Nile Virus WNV [Previrusly]; swine fever CSF aka hog cholera; and most recently in the news Zika virus.
Posted by BobTheScientist at 07:00