Since the beginning of time - well ten years aNNyway - we have been running a 1st Year Biology practical in The Institute about Long Bones.  It's about the structure and function of bones and I've written about it before.  Since last year, a change has been forced upon us by EU Health and Safety regulations.  In the past we've asked our technicians to go to their family butcher and ask him (it's always a him) to cut a bunch of long bones in half along the long axis - humerus, femur it doesn't matter: either, both.  This is the work of moments with the band-saw that was part of the normal kit in most butchers shops.  This will give you a sense of a) what a saw can do and b) why it's dodgy to allow these things on general release: moment's inattention and your thumb is on the weighing scale. The EU has now required these potent[ial] hazard to be used only in central meat-processing factories. That's almost the end of craft butchery as a trade: most butchers are now mere retailers of wrapped trays of pre-cut bits and pieces; some of which they dunk in sweet&sour sauce before sale. I hope it's different in Russia. 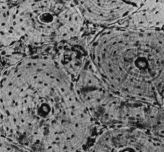 Looking at more microscope slides . . .  of osteons [L] the cylindrical sub-units of compact bone structure is what I sometimes call unreal science because nobody is finding out anything new: they are making [usually rather crappy] drawings which amount to cartoons and then spending a disproportionate amount of time labelling the various bits with Latin names that most of our students can neither pronounce nor spell correctly.  Task: draw lines between structures in the photomicrograph [L] and these items: lacuna/lacunae; lamella/lamellae; Haversian canal; osteocyte, canaliculus.  Why the Latin ffs? Why not: hole; layer; Haversian tube; cell; small lateral tube ?  It would park a trivial naming-of-parts and allow us to concentrate on polishing observational skills.

Like last year we used toilet rolls as a metaphor for the hollow cylinder that is the long bone's central section [diaphysis for you Latin-Nazis]. This year, instead of using A4 lab-books [average wt about 500g], I dropped by the office to pick up a box of xerox paper because A0 is exactly 1 sq.m in size [in the ratio 1:Sqrt(2)] and xerox paper is 80gsm, we know that a N=500 ream of paper weighs exactly 2.5kg and a boxful = 12.5 kg.  Matt Parker raves on about A4 and why it's waaaay better than US Letter size <huzzah Europe>.

Four toilet rolls weighs very close to 25g, so if they can support a ream of paper that's a weight/load ratio of 1:100.  We had two 16 y.o transition year TY kids auditing the class and I asked them to estimate/guess how much they thought their 4 "legs" would support - "form a hypothesis" in science-speak.  By the time they had hesitantly suggested "1 ream", my most active group had stacked 5 reams, 12 lab-books, three boxes of latex gloves and an iPhone on theirs.  That was close to 20kg or a load ratio of nearly 1:1000!!  I think we were all surprised; and the rolls didn't look anything like failure.

Then one of the girls piped up saying that she weighed 59kg [call that 60kg!?] and maybe we should see how many rolls would be needed to carry her - and a wooden dissection tray to spread the load. We were conservative to begin and put 8 rolls down as support.  A few iterations showed that 5 rolls [30g] was enough but 4 rolls [25g] too little <ploof!> to support a 60kg weight. The feeble looking low quality card-board cylinder is good for holding 2000x its own weight. Then a tall well-built chap cried "Me too!" and declared his weight as 113kg close to double his XX colleague's. A lot of toilet rolls were spread out under the wooden tray but they didn't stand a chance <frrrRUB> and it was man down and mangled cardboard. We then had a bit of a discussion about stacking corn-flake boxes at an aisle-end display in the local supermarket. Much hilarity, only partly tempered when stern Chemistry teacher came into to check on the TY kids. But I brought everyone back to earth with some further reflections on their femurs and how much punishment they are designed to take without breaking: it's a lot.

Verdict: a good way to while away an afternoon.
Posted by BobTheScientist at 07:01