The Queen of Ireland

I was off-site yesterday.  Leaving before dawn and teetering along icy roads to catch the bus to Dublin: meeting-meeting-meeting inching outwards the frontiers of science with one-two-three young Women in Science; one finishing her primary degree, one halfway through an MSc and one whose successful defence of her PhD we celebrated last month.  Any of them could, in time, become a leader in her field: quite possibly none of them will find themselves spending their lives doing scientific research. But they have been trained in one of the best labs on the planet for getting to fulfil ones potential - given a little more confidence, allowed to make mistakes, made to acknowledge them, learn and move on.  None of them, however, will be Queen of Ireland - because we're a democratic republic! 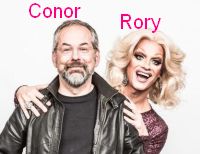 When I arrived home after 5 hours travel and 6 hours sitting round tables, I was looking forward to my dinner [skipped lunch except for an apple] and an evening at the fireside with The Beloved and Dau.I who is over from England for a short week.  But no; I was told to wolf my scoff and get back into the car to go North to Tinahely, two counties and 45 minutes away, to watch a film. No amount of "I'm a baby, it's cold out there" could withstand two strong women doing what was good for me, them, us.  Well I'm right glad I buttoned my lip, buttoned my reefer-jacket and coughed up €6 to watch the new film by Conor Horgan [L, L], about Panti Bliss aka Rory O'Neill [L, R], called The Queen of Ireland. Conor Horgan is the friend of a friend of ours and has made short films about Happiness [throughout the Blob] and Dorothy Cross [bloboprev]; here's he's directed a brilliant documentary about a hugely significant transition in the way Ireland conducts herself. I've written about how Panti shook The Man to the core and forced us all to look into the hatred and fear in our hearts.  It's ludicrous how a statuesque, cartoony, caricature of a 'woman' whom Rory O'Neill plays on stage and on the street can have had a pivotal role in making us become a more inclusive society allowing full equality to a section of citizens about whom many people feel uncomfortable. 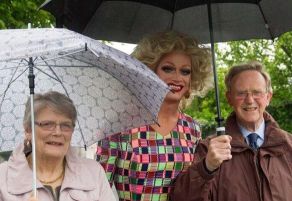 The film records how a casual statement of truth-as-he-saw-it ("almost all of us, including some named people, are homophobic") on television caused a shit-storm of denial and a craven retraction and €85,000 (!!) apology by the state broadcaster RTE. The conflicting assessment of the event, the offence and the pay-out served to polarise the position of the principals: Breda O'Brien, John Waters and the Iona Institute got more self-righteously priggish and Panti got more out-there about the need for free speech. Although you wouldn't have believed it possible for Panti to be more out-there! Almost exactly one year after Pantigate, a handful of indignant islamists took their own action about free speech in the office of Charlie Hebdo. At least nobody died in vindicating rights in Ireland. But the polarisation and the coverage and perhaps particularly the monumental rhetoric of Panti's Nobel Call at the Abbey Theatre [Feb 2014] help shift enough middle ground people to vote Yes in the Marriage Equality Referendum in May 2015 [Blobefore] [Blobafter].  That's something we should all feel proud about. Even those who voted No will, in the opinion of Rory in the film, come to realise that we are better off looking forward - even to an uncertain future - than looking back at the bad old days of smug certainty and fear of difference that some call homophobia. The picture [L] shows Panti/Rory with his folks going back where he came from to bring his peculiar and perhaps necessary form of entertainment to Ballinrobe Co Mayo.

But get this, we are having a general parliamentary election exactly a week from today and the government parties are looking staunchly backwards at their record and comparing it to the even further back record of Fianna Fáil in the previous administration. But nobody is claiming credit for the Yes Vote. That's peculiar and it suggests that the major parties are still ashamed of that decision or at least believe that a fulsome embrace of a still controversial issue will lose them votes. One person from The Establishment who took a decisive stand about the half-measure, slinking 'support' for Equality is Senator Averil Power who resigned from Fianna Fáil over the craven unwillingness of its apparatchiks to actively canvass for a change.  A woman with backbone?  She is running for parliament as an Independent in the Dublin Bay North Dáil Éireann constituency.  It will be a dog-fight there and she'll need all the votes she can scrabble up: tell your friends in Clontarf, Raheny and Howth.
Posted by BobTheScientist at 08:07