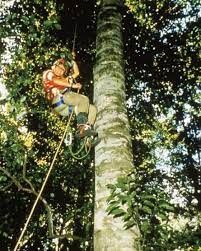 I'm borrowboxing The Arbornaut by Meg Lowman [eponysterical because she is, for preference, high in the canopy and started her career as a rare woman in a man's world]. It's a massive fail on my network that I'd never 'eard of Lowman until I browsed the book from the largely empty prairies of the Borrowbox inventory. There are tree-huggers [meeeee!]whose contact with trees is an embrace at shoulder height and there are Arbornauts who get up up and away into the canopy where most of the interesting stuff happens. A helluva orgy of beetle consumption and sex for starters. Terry Erwin famously revised upward the number of species on the planet in 1982 by insecticidal fogging a section for tropical forest canopy and counting the number of beetles which rained down to the forest floor onto collecting sheets. His Fermi answer was 30 million species, although EO Wilson has upped that to 100 million by throwing archaea and bacteria into the mill.

Meg Lowman escaped from rural upstate New York to a PhD program in Sydney NSW where she wanted to study the effects of environment on leaf abundance. She had to devise all her own hypotheses and the protocols to test them because nobody had done that sort of thing before. Leaves of mature trees were only available after they had been felled and it is hard to do time-longitudinal studies on something that is about to become board-feet. With consultation from spelunkers, she invented and designed a tree-climbing harness which allowed her to dangle from a branch high in the canopy and have both hands free for taking notes, holding calipers and swatting off spiders and midges. Later on she was sundowning after a day's field work and bounced into existence the idea [but not the patent!] of a permanent walk-way through the off-ground habitat. That greatly enhanced access for the Citizen Scientists she recruited through Earthwatch and also made repeat measurements of exactly the same trees possible. Before that she had been sling-shotting lead-weighted fishing line over branches to haul up the rope for her arbornaut harness.

It soon became apparent that the most significant impactor of leaf life and density was herbivory by insects. Until Lowman went a-sampling and a-counting, botanists had guessed that 3-4% of the leaves were consumed by insects. Her work required that number to revised upward by 10x. Trees are supporting a huge biomass of chomping coleoptera. 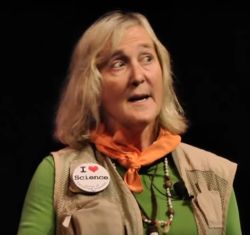 Meg Lowman [R] is about my age but she doesn't seem to be retiring anytime soon. Possibly because she took her two chaps into the field with her, and grew to appreciate their keen eyes, she has gone out of her way to mentor young women in science from Abyssinia to Assam [and that's just the As!] because she herself had zero [to the nearest whole number] female role-models for science in school and college.

She surfaced my horizon recently in the Guardian Ethiopia [bandwidth-sapping pictorial essay] where she is mentoring the priestly guardians of the only tall trees left standing in the country . . . surrounding the existing churches which have, so far, been able to resist the drive to get more land under cultivation [tef!] to feed the vaccinated [smallpox rather than covid, of course]  millions. Again, she was a woman in a man's world but they recognised that she brought essential information and different ways of seeing to the table. Wordier story in National Geographic.

The priests rowed in behind a solution that is parallel to that which built the landscape we inhabit in rural Ireland. The stones were picked out of the fields surrounding the church forests [enhancing productivity] and used to build a wall around the sacred property sufficient to deter wandering livestock; and so protect the regenerating seedlings on which the sustainability of the woods depends.

Meg Lowman is #99 in my women in science series.