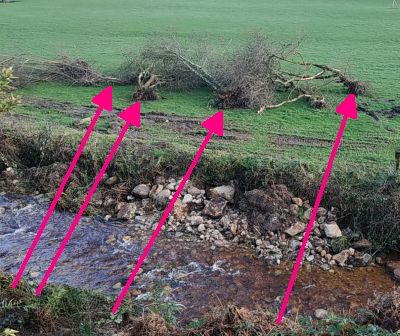 Did I mention that the laneway up to our house almost washed out on Christmas Day? I did. There's going to be a lot more of that mega-weather in the future; so it might be prudent to think about priorities and the contents of your Go Sack while you're still cosy on the sofa. In our case 1) get vehicles down what was left of the road as the right of the road was getting scoured 2) address the cause of that downstream flood 3) attempt to divert water from upstream of the house. We dealt with these top priorities in exactly the wrong order BUT I was/am happy that we got those three tasks on the emergency To Do List. Preparing the BrusselSprouts, laying out another roll of TP and clearing the floor of wrapping-paper were all waaaay down on that List.

I wasn't until a full week after Christmas that we really took on board that there had been a simultaneous crisis at the far end of the property where our fields end at the County borrrder. For about 500m that border is coterminous with the Aughnabriskey, a tributary of the River Barrow which serves a catchment of several hundred hectares of boggy upland and dry heath. Although these uplands have some capacity to adsorb rainfall, a helluva lot of storm-water has to flow down a stream bed which in high Summer is about 4m across and 15cm deep. The field from whose edge I took the photograph is called the field over the river because it hangs over a 10m drop to the river bed.

The field on the other side of the stream is the first bit of flattish land encountered by water as it courses off the hills and in an ideal world would serve as a callow allowing storm water to lose its energy as it spreads across a wider area. Farmers in general are not happy to own callows because standing water is heavy, compresses the soil beneath, and cannot graze cattle. Banking off the downstream callows causes the water to back up and town of Clonmel is flooded pretty much every winter on the regular [bloboprev]. Ultimately because private property trumps the common good in the Irish constitution.

My neighbour acquired a mighty tonka-toy tracked digger a few years ago and has used this monster to grub up the stream bed and build a berm along the edge of his field in an effort to prevent the meadow getting flooded. The paltry efforts of one man, even with a 120cm digger-bucket at hand, can do little in the face of acre-feet of running water - remember 2017 Oroville? that was concrete . . . or rather gone-crete. Anyway the berm was breached and neighbour pulled out 6 or 8 well grown alders Alnus from our side of the river [pink arrows in the pic] because they had been undercut and were damming the flow. We might have wished to be asked first but farmers tend to view trees as an obstruction even if there isn't an emergency. It would have protected our bank better if the roots had been left in place, too. I guess we have some fire wood for the 2023 season.

Yesterday I went down the fields between showers with a big-arsed iron bar and a bag of rooted willow Salix cuttings which have been sitting in a bucket of water since last winter. If we avoid another 100mm/24hrs deluge this winter then the roots of these pioneers will stabilise the bank better than any number of big stones. note to self: more willow cuttings needed.