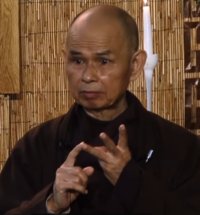 Regret to report that Thầy [teacher: R teaching a thing or three] Thích Nhất Hạnh passed on to his next adventure today on the stroke of midnight Vietnam time. In 1975, with the Fall of Saigon, TNH was exiled in France and not allowed to return home. His community purchased land in the Dordogne intending to support themselves growing and selling plums and plum jam. Le Village des Pruniers Plum Village was founded in 1982. His early book The Miracle of Mindfulness: An Introduction to the Practice of Meditation [1975] struck a chord among those of the Lost Generation whose spiritual and affective lives had been shaken loose from their own tradition. An increasing income stream flowed into Plum Village from running retreats and workshops for those who were seeking a better inner life. 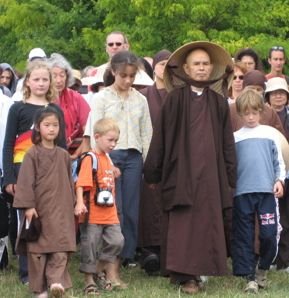 In 2006, The Beloved and I went with Dau.I and Dau.II for a week-long Retreat For Workers in the Neurosciences. A certain amount of hilarity ensued. But it was also extraordinarily affecting: the monastics devote a good bit of time to their music and it's hard to be Dr Skeptic-Face when everyone comes together in harmony to sing namo avalokiteshvara . . . Now you know everything

Thầy was a great believer in walking meditation. This happened most days on the Retreat and with 700 questers and seekers on site there was a certain amount of discrete jockeying for a position near the centre of karma. Call me cynical but all that angst & neurosis seemed to put a damper on TNH's equanimity and his standard practice was to seize the hands of the two nearest children to keep the needy adults at bay. I reflected at the time that, when Dau.II [L,L] and Dau.I [L,R] are the age that Thầy was then, they would be able to tell their own grandchilder that they had been Present at the birth of a movement which now bigger than Islam and Xianity combined - they had walked with god.

Five years later a whole team of monastics led by TNH came to spread the word in Ireland. The Beloved was centrally instrumental in getting the ducks convention centres in a row to make that happen. Further hilarity ensued when I became the chauffeur of the rented people carrier which was to transport Thầy and his cabinet from the Airport to Dublin to Killarney to Dublin to Belfast to Airport.The old chap would doubtless have preferred to be driven by a child but a) that's not legal in Ireland b) I knew enough to speak only when spoken to.

He suffered an incapacitating stroke in 2014, received the best medical care available in the USA but left the West for good in late 2018, returning to Vietnam after half a lifetime in exile.

Hail and farewell and Bon Voyage!