It's more than 20 years since we were co-instrumental in the launch of HEN, the Irish Home Education Network. Two things glued the disorganisation together: an annual 'gathering' and a ~quarterly newsletter. One of the early invitees to address the gathering was Máire Mullarney who was old enough to be my mother and had raised a family of 11 kids with very little formal schooling. And written a book Anything school can do you can do better documenting the wide range of interest her very different children had in school-school. The following year we asked Máire back again as part of a panel of Old Hands to field questions from anxious newbie home edders. Well that was a bust! Like Linus Pauling going off the rails about vitamin C, by that stage, Mullarney had gone Full Metal Esperanto and every question was framed by Zamenhoffery. 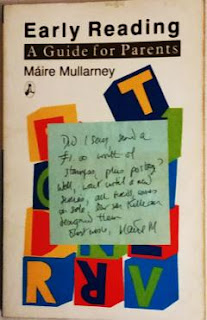 When we started editing the HEN newsletter, I was always casting around for people to interview, and on that button-hole list was Killian Mullarney, who'd spent his entire life observing, drawing and painting birds. But, while a number of people in my Wexford orbit claimed to know Killian, the word was that he was all grown-up and didn't want to be defined as the offspring of a home ed guru / activist / Esperantist. So that interview never happened. I was therefore looking for our copy of  Anything school can do you can do better but could only locate Mullarney's guide for Early Reading [as L]. Which contained a remarkably timely autograph book-mark [also L] "Did I say send a £1.00 worth of stamps plus postage? Well, wait until a new series, all birds, comes on sale. Our son Killian designed them. Best wishes, Máire M".

The new convener of the Wexford Science Cafe is much better networked than me and last Tuesday Killian Mullarney was our guest speaker - even though we are not yet meeting face-to-face. Here is a man who has invented himself; now making a living from the his researches into the life and times of birds. There is another ornitho-earner in Eric Dempsey, whose memoir Don't Die in Autumn [bloboprev] is worth digging out of the stacks in your library . . . or Borrowboxing! Neither of these blokes went to college or even finished school, yet they have become respected experts in their field.

At WSC we heard the epic saga of getting the definitive Birds of Europe into print. Actually, of course, "definitive" because, as the kit gets better and the patient telescope-hours accumulate, revision of certainty is a constant in ornithology. Most of the birds you see out there do not have the perfect crisp plumage of alpha males which appear in bird books - most of the flock are scruffy looking juveniles and less blinged-up females. The book was initially commissioned in the last century by Collins. Their corresponding editor died suddenly, Collins was taken up into a publishing MegaCorp which wanted a quick return.The other illustrator Peter Grant also took ill and died. Eventually the Swedish [junior] publishing house owned the project and the 1st edition was launched 15 years after the initial commission. A 3rd edition is to hit the shelves this Spring 2022.  Mullarney is one of the leads on The Sound Approach which encourages the use of a final front-ear to assist the eyes in bird ID. Interesting riff on sounding out of birds on MeFi. As his Mother mentioned above, Killian Mullarney created the gorgeous set of birdy definitives for An Post: 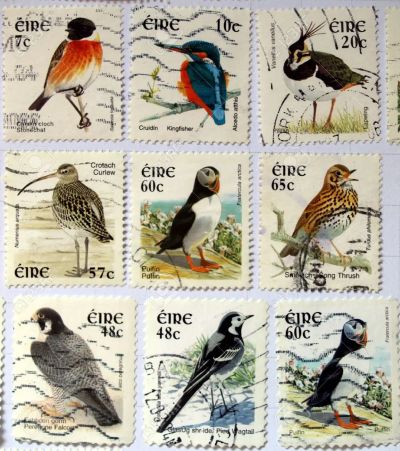 Peter Grant the ornithological illustrator is not the same as Peter [and Rosemary] Grant, experts on the evolution of Darwin's Galapagos finches. At least the 2019 An Post Europa bird stamps painted by Mullarney have their Latin names.