Since we moved into the farrrm, we've had <counts> five [5] different plumbers on the payroll. The first installed a) copper pipes throughout: in an area known to have copper-eating acid water b) a truly byzantine heating and hot water system c) the grit filter on a sideline of the water system that didn't go to the house. Grit from the newly sunk well accordingly washed into the house . . . to embed like fossils in all the tap washers so they ground out their seatings . . . to block the inlet jet to the header tank . . . and fill the header tank with an inch of fine sand. The first copper hot-water cylinder lasted 15 months the second 2 years until replaced by stainless-steel. The copper pipes lasted about ten years and failed sequentially over the next five to be replaced by qualpex plastic piping. So many drips through the kitchen ceiling!

The current plumber answered an emergency call two years ago. In the chat afterwards, he refused to change the washers on the kitchen taps because he reckoned the corrosion hereabouts would be near terminal, but did offer to replace the mixer tap unit in the kitchen if we found one which suited [the decor?!]. I operate on an if it ain't broke don't fix it basis. If the t'ilet doesn't flush easily, I'll happily fill a bucket. This Christmas we had a house full of family though, and they all needed to be instructed in how to flush the upstairs jacks. This was quite the ritual for house-guests of my father's generation "you need give the chain a half pull and then heave like buggery". Something clearly needed to be done and at the beginning on this week Current Plumber said he'd time free if we could source the parts. 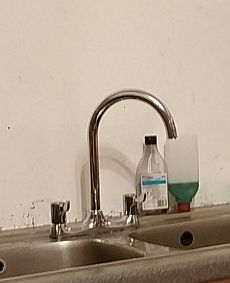 The kitchen tap unit [R, with lever-taps and height enough for a hot-water bottle] was replaced soon enough but the upstairs toilet cylinder proved to be of sterner stuff. The thing is that toilets are designed so that the workings are invisible - users must not be frightened by the sight of a ball-cock or a rusty bolt. Plumber decided that the problem was only obviously to do with the flush-handle: the fact that was banjaxed through strain hinted that the siphon was probably defective as well. Toilet fittings are fixed together with threaded steel bolts and wingnuts but these inevitably get corroded unless the householder [that would be me] routinely keeps them oiled, greased and undone and re-tightened. At some stage in the derusting process, Plumber asked if there is a vice-grips in the house. Fakk! There is; but that tool could be in one of 3 places, two of which are outside in the dark beyond the reach of electric light. After 10 minutes of fruitlessly turning stuff over by torch-light, the vice-grips manifest itself in a 4th place [with the spanners, duh] and I rushed them upstairs.

"Every man needs a vice-grips"
"Maybe so, I'm not a proper man clearly: I have vice-grips but I don't know where they are"

I also have a selection of spare hack-saw blades which was handy, because the wing-nuts clamping the cistern to the pan were seized entirely. ¿Why oh why do designers of bathroom ceramics recess the bolt-holes so that they cannot be accessed with an angle-grinder?  Likewise ¿Why oh why do designers of bathroom ceramics think it's a good idea to insert the inlet pipe into the cistern through the bottom? Yes, yes, I know it's because it cannot there be seen but really, it is a hostage to leaking fortune innit? The poor weary plumber dried his hands, tidied up and knocked off at 8pm. At 1 AM I get up to use the facilities and get a wet sock. The in-pipe has a micro-leak producing drip . . . drip . . . . . drip at the rate of about 1 ml  per hour or half a cup a day. We have a bucket, we are fine.

Not for the first time, I reflected with St Plumb that Ould Ray, who lived in this house from 1941 to 1994, never had plumbing woes because, before we came with our city ways, there was no well, no pump, let alone running water and a flush-toilet. Since then so many pipes, so many stop-cocks, so many joints, so many ball-cocks, so many spigots and so many pumps all ready to go wrong on us.