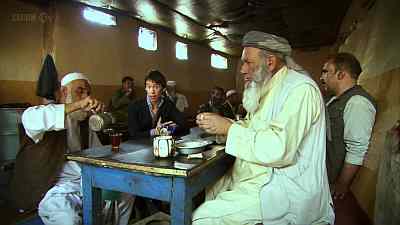 It's not going to happen but it's pleasant to imagine Rory Stewart as Prime Minister across the water. I written about him, and his not a complete waste of trees book before. He's a patrician and a landed-gent and the MP for Penrith and the Borrrders since 2010. On Mayday this year he was appointed to the Theresa May cabinet after another resignation as Secretary of State for International Development. He has previously held the Prisons and Africa portfolios. Those are pretty dark and probably thankless areas to manage but he's not afraid of 'difficult' having walked alone (except for the dog) in midwinter across a chunk of Afghanistan in 2002. From that I take it that he's happy in his own skin (and in his own boots) and has reserves of self-reliance. A small-small example of this competence is the fact that he delivered his own firstborn in the bathroom at home, when things came on a little too quickly. He's shown above taking tea and talking to camera in a BBC documentary about his history of Afgho. Here's a shorter talk about his long walk. And finally is his Desert Island Discs gig.

He's been a diplomat in Indonesia (East Timor times) and Montenegro (Kosovo [prev] times) and Iraq. After hanging up his Foreign Office pinstripes, he taught Human Rights for several years in Harvard. From there he returned home in the belief that he could make a difference in his own country as he had endeavoured to do in some of the most benighted, conflicted regions of the world. The UK doesn't yet have roaming gangs of AK47-wielding hoods tooling around the country in jeeps, but the country is definitely conflicted over Brexit. Here's Stewart trying to make sense of the Brexit situation with James O'Brien. And also lost as to how to solve the conundrums of 21stC society: how to square the circles of fairness, ambition, rights, responsibilities and freedom. My impression is that the other Eton-and-Oxford [k]nobs have lived a very constrained and sheltered life, the only people outside their own circle with whom they have had a conversation is the head gardener.  Stewart au contraire has talked long and hard, in Farsi and Serbo-Croat, under conditions where getting the wrong sense of what he heard could mean that people died. A man who can make valuable diplomatic contributions in the Balkans might be able to thrash out an agreement between the Centre-Left and Centre-Right of British politics.

To be successful in politics you've got to know your shit and think on your feet. Here's Stewart, in a ten minute journey across space and time, giving MPs more than anybody needs to know about hedgehogs. That is rhetoric at its best, that's what they teach kids at Eton - how to persuade people to your view while <look up there!> persuading them that your wealth and their poverty is not what We want to talk about. At the end of his speech Stewart rejects the hedgehog as a metaphor /mascot for Britain.

Here's a hymn to binder-twine triggered by an unfortunate tweet by Rory Stewart about his constituents. Ah baler/binder twine, the farmer's friend!
When we came to the farm 20+ years ago, there was almost enough baler-twine. I would see great lengths of it un-wound in the hedges and stop the car to salvage it. Every bale of straw we bought came with 30m of the stuff for free. We had enough for me to make [really terrible, asymmetric] netting with it. But now it's all gone: hay and straw are baled with a couple of turns of hideous micro-filament netwrap, which is more 'economical' than twine. Netwrap is single use that leaves nothing but tangle and clutter, I hate it.
Posted by BobTheScientist at 07:30