After What is Life? and Is there a God? the fundamental existential question might be Who am I? and Where do I come from? For most of us it's straightforward: we have a Mammy and Dad, siblings, a birth certificate. If we ever want to know Where are my people buried? then we can just ask The Folks . . . or Auntie Em, if the parents are reticent or dead. Things are not so easy when the birth-cert father turns out not to be the genetic father. But that can provide an interesting insight into the relative weight of genes and environment nature vs nurture.

My Brother txtd me one evening to ask if I'd ever sent some spittle to 23andMe [prev], or equivalent, for DNA testing. My response "I wouldn't do it without you. These tests are grand for telling you that you have red hair and cystic fibrosis [which you surely knew already] but are much less reliable at telling you how much Neanderthal, Jewish or Xorgian 'blood' you have and therefore not worth $100 of edutainment".  It is marginally more interesting to send in a batch of sibling spit because that will give everyone a handle on what the error-of-estimate is when they say that you are 43% Cajun. otoh, if the genetic pedigree answer is wildly different between sibs, it strongly implies non-paternity in some members of the family. Which is not necessarily something that we all wish to bring to the surface. I've ruminated on the issue before. 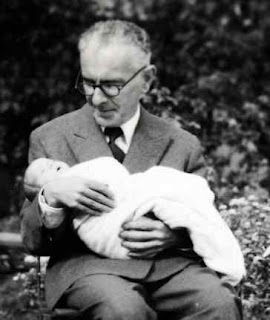 It turned out that The Brother's after-dark interest in paternity was triggered by the fact that he was talking to 'one of Berthold Wiesner's children'.  Maybe even the swaddled infant on Wiesner's lap [R]??
Never 'eard of 'im!  But I assumed, in the conversational context, that Wiesner was one of the pioneers of DNA sequencing technology.

Turns out Wiesner is rather the opposite of non-paternity, having been the sperm-donor for an estimated 600 children born 40 weeks later in and around the London Fertility Clinic of his wife Mary Barton. In those patriarchal times, it was unthinkable that failure to conceive might be anything other than the woman's fault. In her previous marriage, as a medical missionary at the frontier of the British Raj, Mary had seen the shitty end of the stick being brought down violently on the heads of women for failing to deliver a son. She realised that it takes two to tango and that male infertility was going to be at least as much of a problem among affluent Brits as among Pathans up the Khyber. In 1939 she was divorced and in 1943 married Wiesner an, originally Austrian, physiologist who was interested in the hormonal control of pregnancy.

Over the next few years Dr Barton told her clients that she could sort them a teaspoonful of quality semen from a stud of highly intelligent, good looking donorS. But the most convenient source of this precious bodily fluid was her husband who was at least symmetrical and not demonstrably stupid. When they published their interim findings in the BMJ in 1945, there was a predictable shit-storm of condemnation from Geoffrey Fisher, the predecessor of Michael Ramsey as AB of C, and Pope Pius XII. The full text of the 1945 paper is a real eye-opener about the causes of infertility and practicalities of insemination. Cases of married men with viable sperm who just cannot get it up make me wonder whether the poor chaps just weren't excited by women. For blokes who have a very low sperm-count, the clinic could provide an in vitro centrifugal sperm concentration service. The authors realise that asking the husband's brother for a contribution is fraught with ethical and practical difficulties. AI provided an opportunity to check the semen for infective microbes . . . and do something about it. 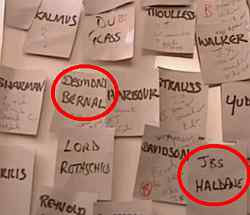 After the very public hoo-har, the clinic pulled in its horns [fnarrr!] but carried on the same services discretely and profitably for another 20 years. By the time Wiesner was all wanked out retired, an estimated 1500 successful conceptions had been carried out at the clinic. The clinic closed in 1969 and the records were discretely disappeared. Jonathan Wiesner, the legitimate son of Barton and Wiesner got his DNA sequenced in 2007, which data serves as a template against which possible half-sibs can identify themselves. Thirty, all above average of course, have since joined the club.  Not ALL of Mary Barton's deliveroos were 'by' Wiesner. Other suspects include JD Bernal [prev] and JBS Haldane [prev] - the still [R] is from the film Offspring by Barry Stevens Not a Son of Wiesner but who has discovered a congenial half-brother in his search for genidentity.

Because patriarchal me knows where I come from [King's County etc.]. I'm tickled, rather than shamed, by the idea that my great-grandfather was the 'natural' son of the Laird and his red-headed cook.
Posted by BobTheScientist at 07:28