In January I did a Sunday Miscellany for the letter K. There I shared a version (with lyrics and a Soviet flag) of Kalinka, the classic tempo-switching Russian folk song Kalinka. We're used to see this sung by a bunch of smart, portly, Red Army soldiers with enormous hats and several chins. Well you can hear it with no less professionalism and a little less weight: sung by Columbus International Children's Choir from Ohio. I like children's choirs for themselves and also for the thought that participatory sports like this can help kids stand up straight and give it socks. London Capital CC do Chinese . . . Josh Groban and kids Raise me Up. That's not the CICC's entire repertoire of course:

You get the idea. These kids have flown all over the world to sing at international events, so they must be good (or backed by a truly enormous vanity bank-roll). And now they are coming to The Déise this Thursday . . . for Free! 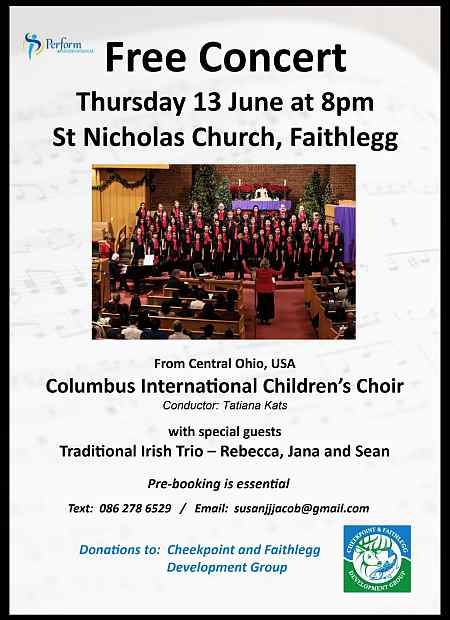 If you decide to dig in to help out the Development of the Cheekpoint corner of the Sunny South East, then you will be building social capital on earth and treasure in heaven. Cue Hadyn's Kyrie.
Posted by BobTheScientist at 17:12