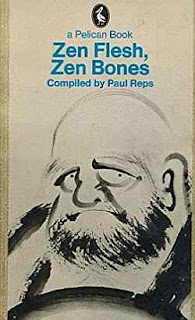 50 years ago, I lived in a town and bought books, like, new books, like, in a bookshop. A little less than once a week, I'd be able to must€r €nough to buy  one book and one week That Book was a Pelican called Zen Flesh, Zen Bones by Paul Reps. I read it forwards, backwards and sideways - especially the first section: 101 Zen Stories. One of which concerned an old monk and a young monk, celibate, who are on the hike from one temple to the next. At a ford in the river they meet a pretty young woman who is unwilling to get her kimono wet. The older fellow picks her up and carries her across, deposits her on the other side and they carry on walking. Later the youngster starts to barrack his older colleague about how he they were not supposed to have truck with ladies especially not young pretty ones. The old man growls "I left than girl on the river bank. You are clearly still carrying her". Ah So! You can get the whole text.

I was reminded of this by a comment by Burhanistan in a MeFi post about Stuff - esp the difference between estate sales and yard sales. "Yeah, someone who is obsessing over decluttering or keeping things minimal is just as weighed down by stuff as someone whose closets are bulging" True dat! Many MeFi people agree that Mari Kondo is not being judgemental or proscriptive; she's just trying to helful to people who are a bit stuck and would rather be unstuck at least, if not 'free'of all that clutter. The hook in that post is an article in Curbed about Estate Sales: rootling through other men's bowers after they die and trying to imagine who last licked that tea-cup.

Here's another comment that spoke to / of me: I revealed my deep, unshakable belief that at some point--maybe next month, maybe in a few decades, but sometime--everything digital will die or be otherwise inaccessible. Maybe forever, maybe temporarily. But you can bet your bippy I'm keeping my paper books because I will NOT be bored during it. I'm the bloke who bought several boxes of chunky wood-screws as portable, functional, currency after the Y2K armageddon that never happened. It's only 160 years since The Carrington Event. Time for another one, maybe.

I really must work through some archival paper work this Summer with a view to dumping most of it. If I haven't read it for 40 years, am I likely to read it again? Well frankly, the answer to that is "Yes, I'm going to sit down; on the lawn; right now; beside this box of old articles and read this really interesting essay about Corsican trout fishing. Yes it is a thing. Then again who needs a rod?
Posted by BobTheScientist at 07:35