Tuck into astacus while you can 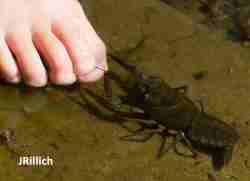 It's looking bad for the European crayfish Astacus astacus [L with toes for scale: the crayfish equivalent of never eat anything bigger than your head].  Like the native red squirrel Sciurus vulgaris [prev] getting displaced by its larger North American cousin the grey squirrel Sciurus carolinensis, the écrevisse á pattes rouges or European or Noble crayfish has been out-competed by a larger North American relative, the signal crayfish Pacifastacus leniusculus, so that the native species is now red-listed as vulnerable.  That's a shame because the species was widely considered a delicacy by the well-to-do of Olde Europe and were an important source of protein among those peasant cultures which were okay with eating invertebrates. Even today, the end of Summer in Sweden [that's about ten days after the start of Summer in Sweden] is marked by a kräftskiva party when large quantities of crayfish are boiled, seasoned with dill Anethum graveolens and washed down with buckets of akvavit. Similar traditions spread as far as Baltica and probably down to Poland. Time was when you could make a 'lobster-pot' out of basketry or weld-mesh, load it with old fish heads, tie on a line attached to a convenient tree and fire it into the water. Any slo-moving river or no-moving lake will do. As darkness falls the crayfish come out of their crevices and zone in on any dead protein. Note on etymology: écrevisse comes from old french crevice, acquiring the extra first syllable by agglutination of the definite article: le crevice becomes l' écrevice etc. The traps are designed to allow animals of little brain to get in but not get out. Accordingly in the morning the fish-head is replaced by a host of pincer-clattering crayfish ready for the pot. Yum! if you like that sort of thing and can be bothered to pick the muscle out of the claws and tail.

The signal crayfish is bigger, so the dismemberment is easier and the rewards are greater. As it is an invasive species, by eating some you are doing your bit for the native fauna and getting a bunch of free food. Here's Gordon "The Mouth" Ramsey making the case for this form of shooting fish in a barrel.

That was fine and dandy except that the numerous accidental, deliberate and foolish releases of Pacifastacus leniusculus across Europe brought with the invaders a fungus Aphanomyces astaci that was devastating to the original inhabitants - the disease is called crayfish plague. The signal (NA) crayfish had been living so long with the fungus that its immune system was able to cope but A. astacus just got consumed from the inside by this aggressive fungus. Imagine having a dose of thrush Candida albicans that sprouted fur out of your nose before it turned in to digest your brain. Did someone mention furry-noses? This all should remind you of white nose syndrome a fungus which is currently hammering North American bats. Over the last ten years, some estimate that 80% of bat biomass in the Eastern US has been turned into worm-food. That has consequences for insect abundance because bats, especially a lactating female, can eat their own body-weight in a single night. The mass-extinction of frogs, which I wrote about last year, is also due to a fungal pathogen. The most chilling, and famous, picture of fungal infection is Jules Hoffmann's picture of a fruit-fly [R] wearing a furry waistcoat of fungal mycelia because its immune system is desperately compromised.

Mais revenons nous a nos écrivisses, The Beloved sent me an ALERT! ALERT! that large numbers of crayfish are going belly-up in the River Barrow between Carlow and Graignamanagh alongside of which I drive on my way to work every week-day. In central European waters, once the core and heartland of A. astacus habitat, it is now very hard to find any, let alone get a dinner together from hunting them. Ireland was a refuge and with this most recent outbreak, another huge catchment area will soon be without the native crayfish.  Remember folks, extinction is forever.
Posted by BobTheScientist at 07:20