Life's but a walking shadow, a poor player
That struts and frets his hour upon the stage
And then is heard no more: it is a tale
Told by an idiot, full of sound and fury,
Signifying nothing.  [Shagsper's Macbeth Act V]
In 1741, Steller's Sea Cow Hydrodamalis gigas bobbed briefly above the kelp beds off о́стров Бе́ринга Bering Island, was described by naturalist Georg Steller, and then was sent off-stage to the oblivion of extinction before we knew anything much about the species. Bering Island, where dat?  It is the last gasp of the Aleutian Islands [prev] which form a violently volcanic Southern demarcation of the Bering Sea:

The Northern limit to the Bering Sea is the Bering Strait, which we've explored as far as Diomede, where Mother Russia meets Uncle Sam. So all the geographical features here are named after Vitus Bering. Here's the most engaging map, by Sergey Pasenuk, [woefully slow connexion: maybe a wood-fire Siberian server?] you're likely to find of Bering Island: 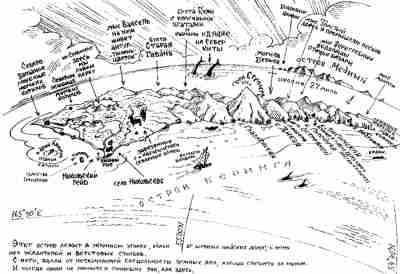 You can see  о́стров Ме́дный Medny Island, the other substantive member of  Командо́рские острова́ Commander Islands in the background.  And who is the commander after whom the archipelago is named? Vitus Bering: no surprises here. Poor Bering is buried on Bering Island, having died, probably of heart failure aged 60, on his way back from Alaska on the Great Northern Expedition. His ship was wrecked on the island but the crew struggled ashore and survived on berries, algae and whatever vertebrates they could capture and slaughter. One sea-cow was a lot of dinners because, according to Steller's notes, an adult was 9m long and weighted almost 10 tonnes. The high salt content of the sea-cow diet [kelp, kelp, kelp, kelpeddy kelp] meanst that the sea-cow meat sort of auto-preserved itself. 10cm of blubber provided a convenient fuel for cooking the slabs of meat. Nevertheless 28 members of the crew died, probably of scurvy, possibly because the were unwilling to follow Steller's strictures about eating more berries and sea-weed and less prime rib.

Eventually, the survivors, salvaged material from their wrecked ship and constructed a small vessel from the timbers, in which they sailed back to civilisation in Петропа́вловск-Камча́тский Petropavlovsk-Kamchatsky. 'Civilisation' is relative because the settlement had only been established the year before by Bering before he departed on his final, fateful, fatal voyage. One of the items of cargo the mariners brought away were a number of sea-otter Enhydra lutris skins, which along with reports of Steller's sealion Eumetopias jubatus seals (Callorhinus ursinus, Phoca vitulina, Phoca largha) and sea-cows showed that Bering Island was rich with exploitable resources. The last sea-cow was sighted and slaughtered in 1768 just 27 years after its discovery to science.

Mermaids? Sea-cows, along with manatees and dugongs are members of Order Sirenia named for the mermaids who attempted to seduce Ulysses to a fatal shag. The word manatee is cognate with the word for breast in Taino, and dugong means lady-of-the-sea in Tagalog. It is true that sirenians have a pair of pectoral mammary glands, so maybe after many months at sea, the imagination of sailors may have become a little elastic.  I go down this road because the incomparable Bill Bryson went a similar route before on his Lost Continent [prev] road trip: " I drove on to Grand Teton National Park. And there's another arresting name for you. Tetons means tits in French. … The first French explorers who passed through northwestern Wyoming took one look at the mountains and said, "Zut alors! Hey, Jacques, clock those mountains. They look just like my wife's tetons." Isn't it typical of the French to reduce everything to a level of sexual vulgarity? Thank goodness, they didn't discover the Grand Canyon, that's all I can say. And the remarkable thing is that the Tetons look about as much like tits as … well, as a frying pan or a pair of hiking boots. In a word, they don't look like tits at all, except perhaps to desperately lonely men who have been away from home for a very long time. They looked a little bit like tits to me."
More islands
Posted by BobTheScientist at 07:05