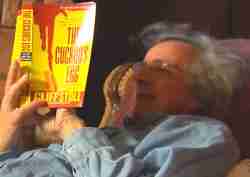 What's the opposite of stolid [impassive, calm, dependable, and showing little emotion or animation]?  A case could be made that it is stollid, after Cliff Stoll the author of The Cuckoo's Egg [reviewed] and occasional contributor to Numberphile. The Cuckoo's Egg came out in 1989 and is a nerd's thriller. From a tiny discrepancy in the accounting software on his mainframe computer in Berkeley CA, Stoll hunts down ring of German hackers who are trying to infiltrate US government networks to sell the goods to the KGB. It's a race, I read it on the edge of my sofa, rather than settled back on Stoll's [R reading his magnum opus  while immobile (rare enough for him) on a sofa]. Here's the story in 12 minutes to save you reading the book. This video is an example where Stoll plays it frenetic, fidgetty overwrought - ie. stollid. Nevertheless his exploits inspired me a few years later to make my own small-small forays into protecting the data of my users.

At the end of that tale, Stoll articulates a moral that is mightily important, and not just for science. You can ignore discrepant data and moving quickly on record more data that sits more comfortably with our current notions. Or, like Stoll and his missing 75c you can worry about it and then worry at it like a terrier, pulling the miscreant thread this way grrrr and that nnnggg until it unravels the whole tapestry of our certainty and gives us a new fresh view of this our world. We also need patience to see past the annoying, peculiar, different character traits of other people. They may be aggravating but may still have insight and speak truth.

Treasure your exceptions.
William Bateson (1861-1926)
Here he is reflecting on why the sky is blue, which we've known about since John Tyndall [bloboprev] explained it. And then realising that it's not quite so obvious after all. It is a lesson to us all to refuse to accept it when talking-heads and politicians say that such-a-thing is obvious or is clearly whatever.

Why did this all boil up to the execute section on my 'mind'?  Because I came across a recent contribution from Stoll on the Numberphile channel: here he talks about two different concepts in effective computation: iteration and recursion.

Iteration is when you induce your program to process line after line after line of data.  It is a threshold issue: when the length of your data-file is much longer than the length of the software to process it then you write the code. Otherwise it's not worth the trouble of writing a program and debugging it and scaling it up; it's quicker and more efficient to process the data 'by hand' with the help, if necessary, of your handy calculator. This is a relevant dilemma for my just-starting final year project students at The Institute. They can do a 'pilot study' analysis of some data but, without programming skills, they cannot scale it up to do a substantive piece of work.

Recursion is when your analysis spirals down [or indeed up] through successive depths of data. I saw this happen in a way that made me weak at the knees when I paid my pal Speedo to help me set up a big Unix box to service the needs of Irish bioinformatics. At one point he thought to tidy up his work by removing some temporary files. Not realising that he was at the root of the tree rather that on a peripheral twig he uttered 'rm -R' and deleted the whole operating system. That's -R for recursion. Thank foresight that we had made a back-up!

Much as I was gripped by The Cuckoo's Egg, I was super disconcerted when I watched Stoll giving a TED talk published in 2009 [the talk itself was earlier: TED Monterey 2006].  He roved the stage and gabbled off in all directions, butterflying off from one bright idea to another to the next in a thought sequence which was only related in his head. He had written his talk-notes on his left hand which he insisted on getting captured by the roaming camera. It was chaotic and ultimately disrespectful: you have to meet your audience half-way, rather than induce in them a lot of nervous giggles. My under-Mentor in graduate school Bob Tamarin [multiprev] explained that you wear a tie to an interview to show that you'll jump through that hoop because you want a) the job and b) to be taken seriously. The tie respects the conventions and makes everyone on the other side of the table comfortable. Making other people comfortable is the key to good manners.

At the end of his TED talk, Stoll's legs stand briefly still and his arms cease their windmill as he reads the inscription on the bells of the campanile atop Hayes Tower, in SUNY Buffalo. The sentiment sings to him and the respect it engenders quiets his troubled mind&body.

All truth is one in this light:
may science and religion endeavor here
for the steady evolution of mankind from darkness to light,
from narrowness to broadmindedness,
from prejudice to tolerance.
It is the voice of life which calls us to come and learn.
Posted by BobTheScientist at 06:41