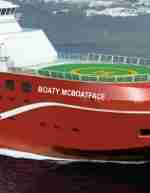 Do you remember the iconoclastic fun that the Brits had last year when asked to name a new Research vessel and nearly everyone signed on to RRS Boaty McBoatFace [R source knowyourmeme.com]. Seems it wasn't wholly original to ex-BBC presenter James Hand: a 2012 Adopt-a-bird naming competition threw up Hooty McOwlFace. NERC, the enviromental research council, with enough gravitas to sink any ship, demurred and named it RRS David Attenborough, after the cuddly voice behind the BBC's nature stories.  It was be a travesty to call them documentaries because in editting down 5.7 years of footage to 8 or 11 or 6 episodes an awful lot of reality gets left on the cutting room floor. Give Attenborough a superficial anthropomorphic script and slather on stirring music and cute sound-effects and you have - scientifically - nothing. Other  suggestions were RSS Cap'n Birdeye, RRS Not the Titanic and RSS Usain Boat . . . har har. The NERC did offer a democratic consolation prize by naming the RSS Attenborough's yellow robot submersible Boaty MacBoatface.

Irish Ferries, one of only two companies (the other is Stena) which allow people to escape from Ireland without flying, is building a new RORO megaferry [bloboprev of hazards of the RORO model] to cope with the traffic. Perhaps foolishly - do they think the Irish have a smaller capacity for irony than our neighbours? - they are inviting The Public to help them name the new boat.
Ulysses, Wilde, Swift. We’ve got some of Ireland’s biggest literary names in our fleet. Now is your chance to become part of a great tradition, and help us find an Irish literary inspired name for our new ship. Be in with a chance to Win Free Travel for life with us. And 20 other great prizes too!

ENTER HERE
The current fleet names are all a bit iffy
Clearly, the management are locked into a name inspired from the Arts Block, help us find an Irish literary inspired name and clearly it is time for a ship named after a woman. Which leaves us with Lady Gregory, Maud Gonne, or . . . [list of mostly forgotten Irish Women Writers]. Gráinne Ní Mháille aka Grace O'Malley the pirate queen is a bit obvious, so should please the unimaginative board of Irish Ferries, but is it an invitation to some 21stC pirates to set off on a long voyage from Somalia to board the new ship as cabin staff? And will it invite an invidious lightning-rod of complaints as passengers see the rapacious cost of coffee and cabins?

If the Venn diagram intersection of Literary & Irish & Women & Dead is a bit thin, let's dump the literary. STEM needs crack at being honoured in the boat-naming business, after all. So here's my submission:

MV Maude Delap
My submitted reason: You've done mythic men, gay men, grumpy men and enough Arts Block. Time for STEM! MD was a great woman in science, at home on the sea too! http://url.ie/11xbl. The link cites The 2013 Blob on this great, forgotten, autodidactic marine biologist who worked the foreshore of Valentia Island and the seas about it. That name suggests a decorating theme of jellyfish in the lounges and bars of the new ferry. Kathleen "Kildare's Own" Lonsdale is better know but has no maritime connexion.

Please feel free to have a punt and row in behind this one:
it will get a profile for Irish Women in Science.

More Women [some Irish] in Science

Posted by BobTheScientist at 08:15