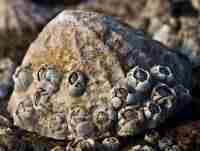 If you quest about the sea-shore, as I do, and are not notably observant, as I'm not, then you might notice a number of Mount Fuji like creatures clinging to the rocks . . . and each other [L] and conclude that they are related because of their superficial form. For many years, taxonomists, including the great Linnaeus and Cuvier used to bin barnacles and limpets together in Phylum Mollusca because of this superficial similarity in form of the sedentary adult. Charles Darwin spent 20 of the best years of his life dissecting barnacles at different life-stages and helped to establish that barnacles were in fact members of Sub-phylum Crustacea and more related to crabs and crayfish [recently]. Some of the key classification data came from comparison of the larval forms which tend to be more widely similar than the more 'specialised' adults.  Maude Delap, Irish marine biologist virtually unknown to moderns, spent a lifetime making the connexions between adult and larval forms of some cnidarians. They, jellyfish and corals, are in a different Phylum again. 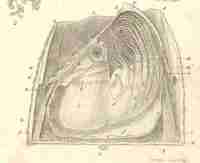 This drawing [L source and better graphics], in Darwin's own fair hand, of Balanus tintinnabulum, shows that the adult barnacle lives the life of Reilly lying on its back waving its legs in the air waiting for food. The other difference is that molluscs including limpets usually have fully roofed protective shell while barnacles must have a top-side hole to wave their legs through. No all limpets, however! Key-hole limpets, of the Clade Fissurellidae, have a neat hole at the apex of their conical shell which is used to expel water brought in from the rim of the conical shell, this allows throughput and expulsion of waste. A lot of functional features in the animal world are sacs with a single orifice. Think your own lungs, which take in fresh air from the top and have difficulty stirring up-and-out the gases languishing at the end distal from the trachea. Fissurellids have evolved a work around for this physico-chemical bottle-neck. And indeed these lads are in a completely different Clade of gastropods from the 'true' limpets Patellogastropoda. It is a warning not to infer evolutionary relationships from gross anatomical form and structure which might be due to a common life-style [here hunkered down on a rock being battered by waves].

Many sedentary animals are prone to predation by star-fish which move in on the limpet citadel, prise the feet from the rock and eat the soft wobbly bits which are thereby exposed. One species of keyhole-limpet Diodora aspera fights back in a variety of ways one of which is to provide house-room to a polychaete worm Arctonoe vittata which acts as a sort of guard-dog: biting at the sensitive tube-feet of the starfish until the predator is seen off the premises.  I tell ya, the Universe is stranger than we know . . . especially if we look carefully.
Posted by BobTheScientist at 07:53