A few days ago, I was writing about a lesson plan to get the students at The Institute to think about numbers and guesstimate a few statistics. On the day we registered the incoming first year students, they were given an orientation session for each of the courses they have signed up for: physics, chemistry, biology, lab science and quantitative methods QM. I had each of the four student groups for half an hour of QM. I'd overheard  my colleagues using the opportunity to transmit information "you must wear PPE = white-coat, closed shoes, safety-glasses . . . here is the fire extinguisher . . . there is the eye-wash . . .". There's only so much of this you can take in one sitting before you have to shovel out previous information in order to accommodate new stuff.

Instead of that, I gave each tuthree people a sheet with four questions which required an answer although nobody in the world knows accurately what the true answer is. Here we go: 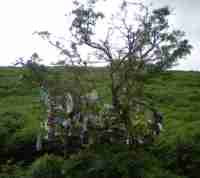 You should give [some of] those puzzles a go, yourself. The answer is far less important than the process of thinking it through. My students were almost all initially reluctant to test their mathy mettle. "I have no idea" being the commonest response to the question direct. With some, when I said that they didn't have, couldn't have, "No Idea", they picked up the baton and started to move off the blocks. This sort of Socratic method was often used on my poor daughters  "You have No Idea how many trees? . . . Is it more than the 20 trees that we can see out of the window? . . . Is it less than the Eddington Number?". If you can see 20 trees in this part of campus, are there more than 2,000 trees in Ireland? etc,  It turns out that Ireland has the lowest rate of tree-cover in Europe.  It is now a piffling 11% against a European average of 40%. But that is up from a frighteningly denuded 1% two generations ago. This and other uncertainties make the answer to that question the least certain of the four posed above. Sitka spruce Picea sitchensis plantations, which is the main source of the increase from 1% to 11%,  start off on 2m spacing, so that's 2500/hectare, but how many hectares are forested and how many 'rogue' trees are there in hedges and gardens. The picture [R source] shows the Fairy Tree Crataegus monogyna on the Magic Road near Mahon Falls Co. Waterford.  It is covered with votary rags and holy medals to show that paganism flourishes in Ireland.  In antient tymes, Ireland's tree-cover was as much as 80% “a squirrel could go from Skibbereen to Mizen Head on trees without touching the ground"

Several students came up with an answer of 709 million trees in Ireland.  All that indicated was that they had given up the ould thinking and googled an answer from RTE. That is a bad estimate for two reasons a) it is plagiarism on which we are not big at The Institute b) it is spuriously accurate: writing 709 means you are confident that it is not 707 million or 715 millon, 700, though vaguer, is better because it doesn't imply an unevidenced confidence.  Now I have a mission: never allow students to accept facts-from-the-web without at least doing an order-of-magnitude analysis [see voluminous nonsense prev] to see it is on target rather that off the wall. It will be a task: at the moment many struggle with the fact that there are a million sq.m. in one sq.km.

They were at all sea on the Houston problem above. First many were confused by the reference to the recent flooding of USA's fourth largest city; the event didn't seem to have bobbed across their section of the Snapchatverse. But on to the problem itself. The room in which we were working is 7m x 11m x 3m. There is space accordingly for 231 cu.m. of water. That's a silly answer unless we had used a tape-measure to generate the fundamental LxWxH dimensions, so we could  call it 200-250 tonnes. Or 100-500 tonnes if you're hazy about the size of a metre. I got 20 answers, ranging from 8 tonnes to 378,000 tonnes; only 7 of which were within the 'possible' range. hmmmm.
Posted by BobTheScientist at 07:09