Last week I said I was fed up with going round and round in circles on youtube. Here's an analysis of the site which clothes that feeling of dissatisfaction with an explanation: YouTube has been playing with what's left of my mind to deliver more of it to advertisers.  At least when you finish a book, you can put it down and pick up something else . . . and now for something completely different. The hotter and more effective Youtube algorithm invites you, insidiously, to bide a wee while and have a bit more of similar stuff. We are being massaged towards predictable homogeneity. Like Ulysses passing the island of the Sirens, I'm going to ask some pals to tie me to the mast so I don't dive into a treacherous sea of similarity.

But videos are sooo enticing. Picking up a book is hard work, clicking a button to watch something unfold before your eyes - so much easier. Here's nice teaching tool for practical physics: sit in a hot-tub in your knickers and ask: how much warmer will the water get if I heat a 20kg lump of iron red-hot and dump it in the tub? Yes, I think I'll get out of the tub before I try. You can calculate this from the specific heat of iron and water, the temperature difference and the relative masses but that's mere book-l'arning. I think that's a pretty good gedankenexperiment for our 1st students at The Institute.

Vox asserts that climate change will make for wetter tropical cyclones. It's the physics innit? No surprises in Houston! 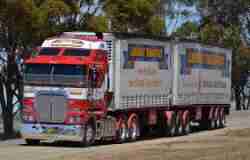 Here's a big truck driver playing with Tonka toys to show how to reverse a train of trailers aka a B-double [real-life picture R] into a loading dock. Here's some real world trucker magic. For these people their rig is an extension of their hands. When we moved into our ruined farmhouse 20 years ago, we had a builder in to make it habitable. The Celtic tiger boom was barely audible in 1996, so everyone was learning their draft. The boss builder had two sons 12 and 14 years old who came to work with Dad during their mid-term break from school. They amused themselves backing the firm's jeep and trailer through the gate into the yard with a tight 90 degree turn. We had a car and trailer and I could also do this manoeuvre. . . slowly and with enormous mental effort, "if I put my left hand down the back of the car will turn thus and the trailer will turn so". The boys just did it with competence amounting to élan, because they were two good pairs of hands. Practice makes perfect, I guess or at least make confident. 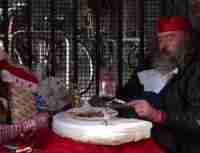 What is happiness? Where is home? Surprising answers from Martin Hart [L having Xmas dinner under the railway bridge on Westland Row] in talking to photographer Donal Moloney. A bit of back story. They got to be good enough pals for Martin to come the next year to dinner in Donal's studio. Christmas dinner with the telly. We have a shocking problem with homelessness in Ireland, especially in Dublin which is beyond the ideology or the spine of government to sort out. I am glad to see that the Dublin Library Service helps out to the extent of providing somewhere warm and dry to spend part of the day.

Here [R border is red line between NI=top-right and RoI=bot-left] is a screen-shot of a BBC-filmlet showing showing just how discordant the county borders are with modern infrastructural features. A longer wordier BBC piece on the same matter. Here the border cuts through the living room of a 19thC farmhouse. The film drones [it has now become a transitive verb!] a car zooming from Clones to Cavan. Because of a huge jink in the border, the driver has to enter Northern Ireland [=UK] twice making four [4!] border crossings in 10km. The Blob has considered the consequences of similar border-fun in Baarle [BE-NL] and Cooch Behar [IN] with Rangpur [BD]. It will all be fine, if Brexit would either a) go away or b) be achieved with a civilised BeNeLux sense of tolerance and accommodation. Actually, the Norway-Sweden border would do [pics] at Morokulien.

Finally, from the other end of the Republic, today Waterford meet Galway in the All Ireland Hurling finals this afternoon. Waterford, city and county is decked out in an absurd amount of blue&white flags and bunting. Despite Waterford's 10:0 record of wins going back to 1938, the bookies are backing Galway: "Galway win: 1/2 Waterford win: 9/4 Draw: 9/1". Nevertheless I have on my blue-and-white underpants of power:


Up the Déise
Posted by BobTheScientist at 08:01