My Son the Engineer [bday = tday], started off in railway signaling. But after he left Global Multinational Corp GMC for a trimmer, more efficient, can-do company he's become much more of a generalist. But he's still stoked to be working in transport infrastructure; not least because his air-mile years were fuelled by interconnected systems. I'd never have gone down that route because in railways, design and specification mistakes kill and/or cost a bundle. I was happier devoting my 'mind' to matter which mattered very little. Nobody died because I tallied up some synonymous codons incorrectly or mis-calculated the frequency of blotched tabby in Campbellton, NB.

I do have a hankering admiration for civil engineers who build bridges which don't fall down and connect the bridges with rights-of-way which are as direct as the landscape will allow. Sometimes the topography will present a really substantive barrier and the roads and rails just have to go round the obstacle. But even at the birth of railways, the best engineers, working for the most ambitious companies, would drive a straight line; brushing aside formidable barriers. John Hawkshaw's 7km Severn Tunnel was completed for the GWR in 1886 [Bloboprev]. Over a similar decade of works, the Gotthard Tunnel was completed under 15km of Alps in 1882 under the supervision of Engineer Louis Fabre, who died before he saw his baby breached.

The underlying aspirations of the EU are to connect and "equilibrate upwards" all its citizens. Let Italian yoghurt exported to France pass French yoghurt on its way to Italy if it allows money to be made and taxes to be gathered. Goods and people want to get to their destination as soon as possible; even if the load is shelf-stable the economy doesn't want to tie up rolling stock for days if delivery can be achieved in hours. One of the key axes of transport runs from the industrial cities of Lombardy north through Switzerland, Germany and Denmark to the industrial cities of Sweden. Ball-bearings and Saabs in one direction, Fiats and suave suitings in the other. There is a strong incentive to straighten out any kinks in the line: 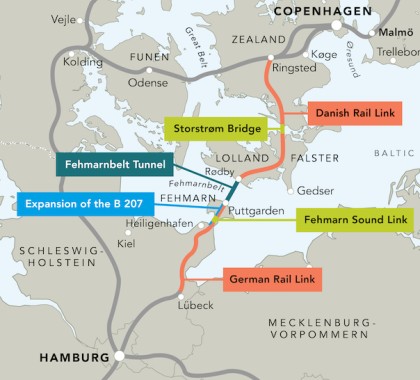 One of the biggest jinks in the line occurs because The Baltic Sea is wet and can be stormy. The Øresundsbroen / Öresundsbron across the seaway between København DK and Malmö SE has been open for business for 20 years but the København to Hamburg connexion makes a big dog-leg across the islands of Zealand and Funen just to reach the continental mainland. WhatIf, the economists, politicians and engineers wondered, we go due South across Zealand, Falster and Lolland? then it's only 45 minutes on the ferry across the Fehmarnbelt from Rødbyhavn, Lolland, DK to Puttgarden, Fehmarn DE. That is indeed currently an option, the trains [and trucks and  cars] load up on the ferry and trundle off at the other end. It is less fun in a storm; and I guess a real pisser for the schedule if the ferry is cancelled for really bad weather.

Ferries? So yesterday, maties! Why not just go under or over all the awkward water? After years of dancing around the issues of finance, cost-benefit and unintended consequences of such a €10billion mega-project the tunnel option got the green light and started to build in 2021. One issue is that commerce doesn't any more have automatically the loudest voice. Shellfish, dolphins, kelp-beds and just shhhh quiet! have their advocates and some of these constituencies have wonga to back their claims. There is also the problem of unexploded WWII munitions on the sea-bed. The current plan intends to deep-dive the 18km gap with a modular system . . . inspired by Lego? The tunnel will be primarily formed of 79 individual 217m long reinforced concrete sections – each 42.2m wide and 8.9m tall and weighing in at 73,000 tonnes. And get this ordinary people: the engineers are allowing a tolerance of 1 part in a million = 15mm over 18 km! 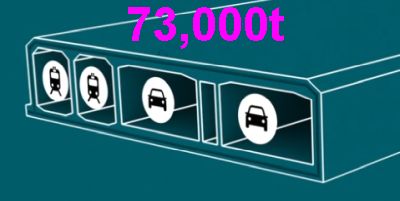 Designed for speeds of up to 200 km/h, the new [rail]road will cut journey times between Denmark and Germany from 60 to 7 minutes. The issues around this Mega-tunnel are laid out handily in this piece to camera by B1M [bloboprevmisc].  Kelp-huggers have tried to pause the dredging - to level the tunnel-bed - in the interests of biodiversity. Here's the party-line from the horse's mouth Femern A/S.