Eee, I do like marzipan. If nothing else, it is a vehicle for sugar / calories. Most commercial varieties are much less than 50% almonds, and sugar is the primary ingredient. The stuff is typically sold in a 500g block which is A lot, unless you are wrapping it round a large Christmas cake. Most weeks of the year, the top compartment of the fridge door has the remains of a pack of marzipan next to the remains of a pack of fresh yeast.

About 2 weeks ago, I mix'n'matched these two products by rolling out some bread dough & slathering it in butter; cutting a few slices of marzipan into pea-sized cubes; rolling the latter up in the former and baking it as a cheapo festive holiday stollen. It was nice, and nicer toasted. But, as ever, my eyes were bigger than my tum, and I cubed more marzipan than could be realistically kneaded into a loaf. Accordingly, I swept the remaining cubes into a small round snap-lid food container and popped that in the fridge against another baking binge. 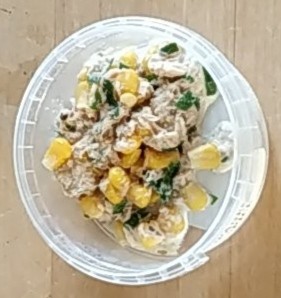 Fast forward a week or so, we have baked potatoes and all the fillings for dinner: butter; grated cheese; sour cream; tuna, corn and scallion mayo; olive oil.  None of these fillings got finished; no food ever gets binned in Casa Blob; so what was left went back in the fridge. The next day, or perhaps the day after, the spirit was strong within me to bake some cake-like comestibles and I reached into the fridge for the marzipan cubes.

Cripes! I cry, that's an aggressive fungal attack [R]. The Blob does crap-quality photos but in this case it captures rather well the gestalt that struck my retina without my glasses. Bright yellow cubes almost overwhelmed by fibrous pink and green matter.

The thing is that what hits the retina is just a part of what we "see". The blooming buzzing confusion of photons passing through the lens of your eye is interpreted by the visual cortex so that it makes sense. Charles Bonnet syndrome is an extreme but common case. In an evolutionary sense we need to know what to do about things in our immediate vicinity: in broad-brush terms: eat it; do not eat it; flirt with it; ignore it; or run like buggery in the opposite direction. That covers most of the situations which matter. Growing up successfully incorporates our experience in better and better interpretive models for dealing with the outside world. Occasionally, especially if tired, hangry or horny, we make a wrong call because what the incommming information doesn't fit our prior knowledge and expectations - we ■ experience ■ cognitive ■ dissonance.